One of the most tiresome themes in the "eyewitness" reporting on African recycling are accounts of smoke from burning wire.  It's definitely one of the most photogenic activities at Agbogbloshie.


The anecdotal wire burning in Agbogbloshie is a product of underemployment and boredom. But if you ask people in the recycling community how much e-waste wire burning contributes to African urban air pollution (smog), you find it gets mentioned a wee too often.

Where smoke comes from:

I asked German photographer Kai Loeffelbein a polite question on twitter about the photo below - from Agbogbloshie.  No response.  I presume he has done just a little bit of background research, enough to know not to climb in the ring.  He's going to ring the bell and get his cash from the publisher for a titillating expose, and let's see if a dime goes to Ibrahim, Muhammed, Awal, Razaq, Yaro and their pals.

So let's talk about smoke.  The photographers like to tell us that's how their work is benefitting the Africans - by saving them from health effects of burning electronics.
READ MORE »
Posted by Robin at 8:38 AM No comments:

"Writing export rules for used electronics without consulting Africa's Tech Sector is like writing health rules without ever talking to a doctor." - Emmanuel Nyaletey, 2018 IERC Congress 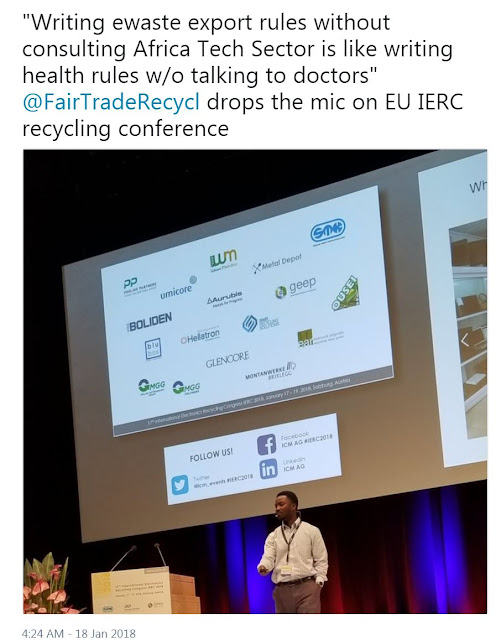 One week ago, one of Fair Trade Recycling's representatives and board member, Emmanuel Nyaletey, presented on a panel to address European Union representatives on their e-waste export policies, especially the ones directed at Africa.

Lessons from EWaste: Listening to "Others" Perspectives

It took 5 more years after the key proponent of the "shocking" statistic about 80% e-waste dumping overseas basically admitted to making it up while soliciting donations (no proceeds of which went to the children in their "e-waste" photos) for the press to stop breathing new life into the ewaste export hoax.

Here and there, a few neophytes still refer to the E-Waste Export Controversy, recalling Annie Leonard's Story of Stuff cartoon or a poorly written UNEP press release.  UNEP for too long used photos to imply widespread dumping, working "90%" into release with pictures of kids standing on junk, despite chart after chart that disproved the 2010 narrative.  Self promoting "Ewaste Tech" fundraisers claim to have eyewitnessed thousands of orphans burning circuit boards in Agbogbloshie.  And wanna-comeback glam-rockers like Placebo's Brian Molko film scrappers holding burning rubber tires over their heads, paying them for a nice dinner... paying scrappers to monkey around with fire that otherwise fails to support itself (adding little if any value to wire).

The game is over.  Today, most reporters following up on a BAN press release find plenty of studies and articles, from numerous sources, debunking the NGO's past "reports".  BAN's executive leader often writes an op-ed attacking the credentials of the critic, but that has shown diminishing returns.  We said it here ten years ago:  "Pay no attention to that man behind the curtain".

Taking a page from Scott Adams Dilbert blog, I'll take a minute to boast about my forecast of the defeat of the e-waste hoax, predictions of the ties that would emerge from the NGO's IRS990s, the involvement of "Big Shred" and "Planned Obsolescence" funding, and the shadow of racial profiling.  In 2010's Blog "Slums and Recycling and Environmental Justice"  diagnosed and foreshadowed the ailment.  In future blogs, I will tell you my secrets, with which you too may win bigly.

"Out of the hottest fire comes the strongest steel." Chinese Proverb