Hey, just a quick note to those of you who have been asking what the latest is with the Fair Trade Recycling Offsets.  I remain really excited about this.  But we had a little setback which has stalled the project.

Here's the history, the latest roadblock in RED.

1. Fair Trade Recycling started with Purchase Orders and Fair Trade Contracts.  When we wrote down what overseas buyers DID NOT ACCEPT, it became pretty clear very quickly that they were not buying stuff to burn it or to operate a "Pollution Haven".  Someone paying us 10 times more for a CRT than it's worth in scrap, but paying ZERO for the same make and model which has damage (disqualifying it from the purchase order) is presumed to be a good actor.

For Thankgiving 2018: Yes, You Are Probably Better Off Than Your Parents*

On social media, I sometimes try to "referee the internet".  That's what I call engaging in political debate or argument. I like dialectic. Constructive argument is better than smile-and-wave, or sweep-under-the-rug, etc. If you have the right touch, the friendship survives.

One of the arguments that is ongoing is over the pessimism vs. optimism for globalisation.

Other species, and the environment, I'm tragically not optimistic about.  My optimism about human lives is actually, in part, to get us to focus on worrying about things that really matter.  Also, I think that unnecessary panic and pessimism, whether to Trump or Bernie, distracts us from making investments that might really matter.

So here goes. When we look at an optimistic video, like GapMinder (Hans Rosling), about more girls going to school, fewer diseases, less poverty, the statistics and facts are clear.  Here is an interesting graphic - The World Poverty Clock.


The graphic shows red (newly poor) and black (newly rich) stick figures, and shows countries in red or black according to how their own population is faring.  I have some funnier videos at bottom.

Here's the argument people most often push back. Many people believe that the current generation of AMERICANS or EUROPEANS is less likely to be better off than their parents generation.

But there are two ways to pose the question. Are we living better than a previous generation? And if so, how did we afford it?

There are two reasons why the number of Good Point Ideas blog posts has declined in the past 24 months.

The first relates to an increase in use of Twitter. As I noted 5 years ago, Twitter is misunderstood as a "squawking box". Sure, there's lots of inane squawking on Twitter. But the most important thing on the Twitter site is in the top right hand... the Search Box.

"Following" a thousand people is pretty impossible. I trim it down with a FairTradeRecycling list of twitter posters I follow more closely. But it is the "saved search term" feature that we need to pay attention to. It allows you to get an early scoop... and if it turns out to be clickbait, it's only 160 characters or whatever.

So ten years ago, the incredible idea below would have been subject of a blog, which would take me 45 minutes to write (and if readers are lucky, another hour to re-edit).  Now I post it bam on Twitter. 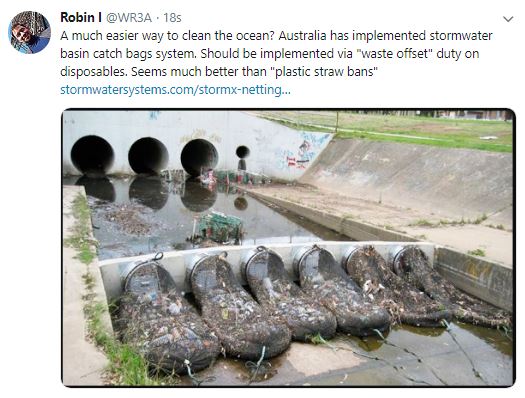 I saw this on a repost from an old pal Wim Roskam on Facebook, who in turn found it on Architecture and Designs rather cool Facebook page.  The problem with stormwater carried litter is obvious if you've been to an African city like Accra, Lagos, Dakar or Douala.  The litter on the beaches is depressing and ubiquitous, and no amount of white savior plastic straw abstinence is going to save the sea creatures there.

STORMX is the license holder (image above is from North American licensee StormWaterSystems.com). The net baggies allow water to run through, but catch the debris... which is the actual culprit of urban flooding - falsely blamed on scrappers of Agbogbloshie 40 months ago. 2015 was the same year that Twitter helped a youtube video of a turtle with a straw stuck in its nose go viral... which led to a LOT of journalist ink going into the plastic straw bans.

10 Things we Know about Basel Action Network's "Earth Eye", and 1 We Don't

What I can't figure out is why the press gives this organization any ink.

This is the To Kill a Mockingbird moment for the environmental community. You either sat by while this NGO made this happen, or you spoke up to #freejoebenson

The Privilege of Being Offended by Appropriation

Living in Vermont, with a wife teaching at Middlebury, and three college kids, I am very aware of political correctness, privilege, and offense.  The "victimhood jujitsu", where something you say or hear puts you or someone else off-balance. The passive aggression, finding subliminal intent where none was on the sayer's mind.

Not that I hold the conservative view... just addressing the educational tactic of reverse-labelling.

PC culture may be a good thing or a bad thing. But political correctness may have unintended consequences when it emboldens a type of anti-bully, a Madame LaFarge, to call out privileged people for oblique intent. Indeed, some of the political right of Brietbart give credit to liberal college shaming to emboldening them. Like in jujitsu, the left shifts its body weight to anticipate the right's weakness, and the right re-leverages its body weight to counter.

Like sloshing in a bathtub, this kind of immature discussion makes a mess.

Insecurity about our inherited history can cause us to project insecurity onto others. It bears a lesson most societies have taught us to resist.