Like the time limits in High School Debate tournaments, Twitter forces us to present a central thesis in a concise way.

This blog has been criticized for being "wordy" or "nerdy" and has certainly often been repetitive.  My "spaghetti on the wall" approach did work, however.  We only needed a small number of the posts to be read by an influential and respected group of journalists, academics, and regulators.

While Basel Action Network is still in the business of demonstrating its "Ayatollah of E-Waste" powers in the state of Washington, bringing its might to bear against Total Reclaim, the "export virgin" it heralded as a model for a decade, they have been completely ineffective at intimidating me.  That's because I'm using scientific method, logic, and transparency.

READ MORE »
Posted by Robin at 8:51 AM No comments: Links to this post


Many readers already know about the E-waste research project, funded by a $469k grant secured by Dr. Josh Lepawsky at Memorial University, Newfoundland.  The project involves research in five countries - Mexico, Peru, Bangladesh, and China. I'm kind of doing Ghana on my own, as is Grace Akese of Memorial U, so I include it even though it's not part of the research funding.

We introduced Lepawsky to Josh Goldstein, a Ph.D. in Chinese History at USC, and Dr. Ramzy Kahhat of Pontifica Universidad Catholica Peru (PUCP).  Lepawsky and some grad students recently completed their first "assessment", based on indept interviews of workers at Retroworks de Mexico in Sonora.

READ MORE »
Posted by Robin at 12:53 PM No comments: Links to this post

Last summer, a friend from Rhode Island asked if I'd read Scott (Dilbert artist) Adams blog predicting since 2015 that the most probable outcome of the 2016 election would be the election of Donald Trump.  Adams is intelligent, his reasoning is thought-provocative, and I've continued to read the blog, and many of its comments and tweets, for several months.

I've read reviews of the blog by commentators who "binge read" the blog.  Since I've been reading pretty steadily, and trading comments, I thought I'd break from e-waste policy to discuss the weaponization of psychology, persuasion, and hypnosis.  Because I don't think cramming his blog is the best way to absorb his thoughts on how to be, or not be, successful in persuasion.

Here is one example of Scott Adams blog, from January, titled "The Persuasion Filter and Immigration" which typically makes the case that none of us are "rational", that evolution has bred us to be "wet robots" responding to greed and fear through psychology.


"I’ve mentioned in this blog a few times that persuasion works even when the subject of the persuasion recognizes all the techniques as they happen. This is a perfect case. The left has been watching Trump make big offers and dial them back for the past year. And yet they still think this time it will be different. The Persuasion Filter says that 70-year old Trump will act the same way today as he has for the past several decades: Big first offer, then negotiate."

"But what about Trump’s critics on the far right who want more extreme immigration? Trump needs to negotiate with them too. And he is. He did that by showing them that his temporary offer was so extreme that people took to the streets. The system (America) is actively trying to eject Trump like some sort of cancer cell. And the worse it gets, with protests and whatnot, the more leverage Trump has to tell his far right supporters that he has gone as far as the country will let him go. He needed that. The protests are working in his favor. He couldn’t negotiate with the extreme right without them."

As a business person, I found this very intelligent, and as a big supporter of immigration and globalization, I was frustrated as heck that the Left fell for Trump's January head-fake.   Trump had (in order to fulfill his 'campaign promise') appear to do something about "Muslim Ban" and artfully selected the exact same countries which President Obama had already issued an order to increase "vetting" of.  The left came out and protested, giving Trump the appearance of having done something dramatic.  Scott Adams was correct, this was artful on Trump's part.

Here's another one, which I think defends him well from accusations that his prediction was Pro-Trump persuasion or bias.  While he was certainly correct that Trump was being under-estimated, and using strong persuasion skills, he safely recused himself through this non-endorsement.


"My personal bias is that I don’t think any 70ish-year old person (Clinton or Trump) should be president. You wouldn’t hire a 70-year old into any other type of job that requires high energy, mental flexibility, and a possible eight-years of service. Why would we do it for the most important job in the land? And keep in mind that we haven’t seen detailed medical records from either oldster."Objectively speaking, we are likely to have incompetent leadership – because of age alone – no matter whether Clinton or Trump wins. That should scare you."-Scott Adams Blog, "Trump Prediction Update", August 10, 2016

And today, he said he was "Tracking His Persuasion".  It looks like he's using dollars to track it, because it's also pushing his books (as he has a software app, WhenHub, which I like in principle).

My challenge in the letter at the bottom of this blog is to convince Scott Adams that environmental science should be given the same respect - and no more - as the study of human health and western medicine.  There will be many, many false leads, correlations, conclusions, along the way.  But we are all more likely to live longer today (as noted by famous statistician Hans Rosling) because over time, the base of knowledge evolves, and the fittest policies survive.  We could be on the wrong track, Trump could be on the right one.  But Scott can't prove that "faith based medicine" would have created the vaccinations we live with today, and should beware of attracting the equivalent of anti-vax followers based on his ability to beat up straw men as political opponents. 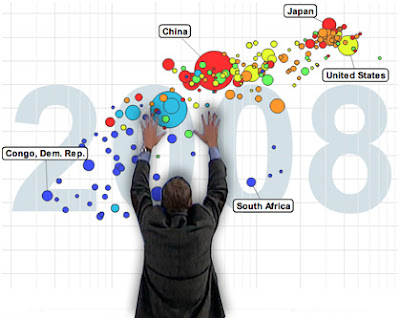 READ MORE »
Posted by Robin at 5:51 PM No comments: Links to this post

"Exaggerations Have Been Made" - NGO Exec Director


I'm really busy this month, in part due to the month away (Austria IERC conference, then 3 weeks in Ghana).  And I was in the Ozarks all last week for my father's DNR and funeral, simultaneously dealing with a tornado that wiped out water, electricity, internet, and my mom and dad's barn in Arkansas.  So... the blog's always poorly edited, but this month I've got really good excuses for it.

Here's what sticks with me from the January IERC Austria conference.  I sat on a panel with Jim Puckett, the Executive Director of the E-Waste NGO Basel Action Network.  We were speaking to a crowd of about 100 European WEEE delegates.

I opened by saying I used to be a teacher in Cameroon, Africa, from 1984-86.  I'd recently been to Agbogbloshie, and was going back again immediately after the conference.  I told the European audience that the junk they had seen photographed there was generated by African households and businesses, after decades of reuse.  Yes, it was originally imported used, but almost always repaired and used for 10-20 years before Africans discarded it.  I told them that 30 years ago my landlord had no running water but owned a (used) TV.  I told them that there wasn't any mystery around the baseline data - the World Bank clearly says that MOST households in cities like Accra had TV or computer 20 years ago, and the assumption that junk captured by photo-journalists was "dumped" in hundreds of sea containers by unscrupulous recyclers was categorically false;  I told them I had met Michael Anane, that he was not telling the truth about Agbogbloshie being a remote fishing village and he had certainly not been fishing and swimming there 20 years ago, that I was unable to find any newspaper that employed him, and that the people I asked in Agbogloshie said he worked for the AMA, the municipal land development group that forcibly evicted thousands of Old Fadama slum dwellers near the site, which they have a published plan to develop into shopping malls etc. The junk is collected in pushcarts from Accra city streets. I told them that the World Bank and IMF determined 15 years ago that used electronics in Africa were essential to creating the "critical mass of users" to fund TV stations and programming, cell phone towers, and internet cable.  I told them that Africa's Tech Sector found "Project Eden" to be scary, a threat to their livelihood, and cringe-worthy as a moniker.

In conclusion, I counted backwards from 3, snapped my fingers, and  told them to forget all of the things Jim Puckett had told them for the past 15 years.

"I will admit, exaggerations have been made."

It strikes me, 6 weeks later, as an incredible use of passive voice.  Exaggerations "have been made" by someone.

Exaggerations have been made, indeed.  Agbogbloshie photos have now disappeared from the CAER website, the conference speakers were now talking about keeping copper inside Europe's "circular economy", and Blacksmith Institute had changed its name.  That NGO allegedly told journalists 2 years ago that Agbogbloshie was the "most polluted place in the world" - something Blacksmith then denied but wouldn't issue any clarifying statement, despite our sending evidence they were cited by the journalists as the source of the claims about Agbo.  They did not tell me how much money they received to "transform" and "save" Agbogbloshie...

READ MORE »
Posted by Robin at 6:41 AM No comments: Links to this post 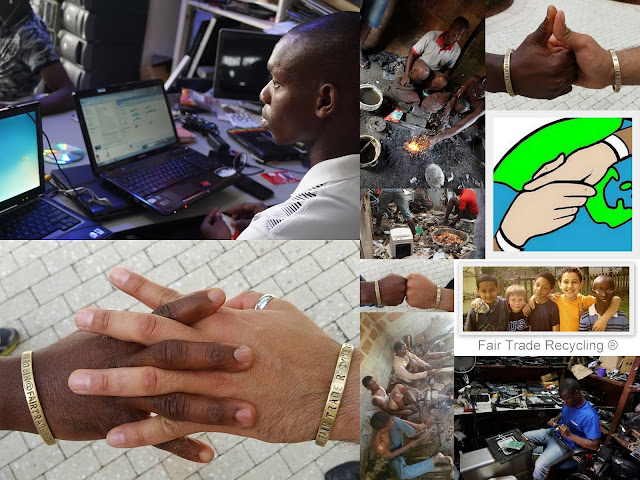 The World Reuse, Repair and Recycling Association, doing business as Fair Trade Recycling, was legally incorporated in Vermont a decade ago.  How have we done, and what it the status?

The group originally had great success by finding very very large import orders (places like Malaysia's Net Peripheral) and working as a collective to supply those orders from USA companies willing to export to the right people.  It was financially interesting to both the buyer and seller.  However, this model created a disincentive to add more members (increasing supplier members diluted USA members, recruiting demand members diluted vetted overseas companies).  Membership reached a critical mass it could not grow from.  We added more USA suppliers, the price of exported goods went down, etc.

The coop model severely imploded in 2012, when a copy of one of our audits of the Malaysia company was sent by a USA Big Shred investor to the Malaysia Department of Environmental Conservation.  The import letter was valid, Malaysia officials said, but they also visited the factory and took away the import permit.

READ MORE »
Posted by Robin at 9:59 AM No comments: Links to this post