The headline, “Thousands of tons of e-waste shipped illegally to Nigeria inside used vehicles” was familiar. In my last blog, I gave readers "the fine print".

Almost everything documented by the 2018 UNU's "Person in the Port Project" (2018) report on used electronics imports to Nigeria corresponds with our 4 years of research in Ghana. Bottom line, the importers are presumed innocent. Most purchases are normal and good. The headline focuses on a statistic that 15,000 tons of 60,000 tons “didn’t work”. Put another way, 75% of the imported used electronics are fully functional. More importantly, the report tells us that of the 25% of electronics needing repair, Nigeria's Tech Sector is the best on earth at fixing them.

"The high skill level of Nigeria’s refurbishing sector, with the ability to fix many technical defects in UEEE at reasonable service cost, also motivates importers to import both functioning and non-functioning electronic equipment to Nigeria."

So the "driverless" waste export theory is busted. Let’s focus first on Ten Things the report gets right.

UNU Gets Closer To Ewaste Truth (B-): But it is LEGAL not ILLEGAL


The "fine print" behind in the UNEP / UNU headline.  75% of the imported used electronics work, and are preferred by African consumers because they perform better than affordable new ones. Of the 25% that require repair, Nigeria's Tech Sector is the best on earth at repairing them.

First the Good News about United Nations University's "Person in the Port Project" (2018).  "Assessing Import of Used Electrical and Electronic Equipment Into Nigeria"...

For a really excellent description of what "drives" the export trade, see section 5.8.1 Economic Relevance of UEEE Trade, Refurbishment and Recycling (complete quote at bottom, in blue).


"The high skill level of Nigeria’s refurbishing sector, with the ability to fix many technical defects in UEEE at reasonable service cost, also motivates importers to import both functioning and non-functioning electronic equipment to Nigeria."

The problem is in the press release, and the headline.  They claim something that is rational and environmentally sound is nevertheless illegal.  And the press release (apparently written by a freaked out white Starbucks barista) calls for law enforcement... without quoting or interviewing the black people who loaded and unloaded the containers.

Africans are in control of this whole trade.  This report does a lot to document that, reversing the narrative that unethical OECD sham recyclers are responsible.

So it doesn't get an "F".  It correctly describes the loading and unloading, and the financial transactions.  Better dressed, better facts, and with credible African co-authors.  But where is the crime?  Where is the waste dumping?

Recalling Booker T. Washington - the report reads like a compromise.  It describes the good outcomes in Africa, but still extends a sturdy olive branch to the WEEE policy hawks who constantly impugn trade with geeks of color in rapidly emerging markets like Nigeria.  A sturdy branch for the European E-Wastes lynch mob, who continue hunting down African technicians.

The session on Vermont S.180 was crammed into one hour and fifteen minutes. I sat on a cushioned wall shelf in chamber room number 35.  Twelve committee members and staff. Three witnesses in favor of the Right To Repair Bill (VPIRG's Dan Brown, EFF's Kit Walsh by phone, and Michael Duplessis, of SunCommon, Apple repair guru). I was a wallflower. 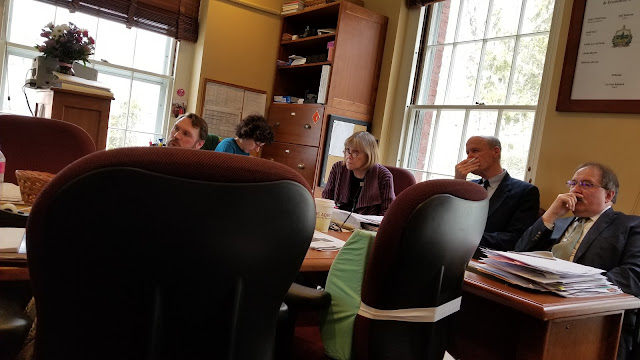 You wouldn't think that the most important e-waste legislation in the United States was being discussed here, unless you counted the manufacturing lobbyists.  Not that the 3 anti-S.180 witnesses were over the top. They'd travelled to talk against a bill that was already defanged. Neutered. Eviscerated.  VPIRG told me it was effectively killed in the previous chamber.

The remaining "debate" is whether the Vermont Legislature should even form a task force or committee to further review the Right To Repair.  The lobbyists were there to strongly advocate not to have any discussions about it.

A lobbyist for the medical equipment manufacturers seemed to insinuate that people could die if finely tuned medical instruments are improperly reused.  A lobbyist for farm equipment dealerships said the line had to be drawn below dealerships.  His members were currently satisfied. (One legislator correctly pointed out the Ag Dealerships were protected by similar legislation when manufacturers prevented them from servicing multiple brands some years ago.... the lobbyist nodded, yes, that's where to draw the line)


The strategy of industry in opposition to discussion of the Fair Repair Act is obfuscation.  They left the impression that the Task Force would have to cover a pandora's box of questions.  The House Committee on Commerce and Economic Development Chairman, Bill Botzow (D-Bennington), was genuinely daunted.  "Which bite of the cake do we eat first?"

Ask about the wall chargers.  Europe already passed rules making them universal, and no airplanes fell out of the sky.

The previous post basically took MIT SustainAble City Labs and E-Stewards to task for the ill-conceived GPS tracking study that succeeded, mostly, in elevating negative stereotypes about both scrappers and tech sector workers in emerging markets.

Basel Action Network is trying to monetize tracking of unwitting, unwilling subjects.  I just hope MIT will eventually do the right thing and apologize for its role in using undergraduate students to place tracked devices, disguised as repairable (and in some cases WERE repaired), and associating legitimate overseas technicians with "rice paddies" and "shantytowns".


"Your goal shouldn't be to buy players. Your goal should be to buy wins... I believe there is a championship team that we can afford, because everyone else undervalues them." Peter Brand, Moneyball

We are working to fly 2 of the brightest LED/LCD/Plasma display techincians I have met in Ghana over the past 4 years to Middlebury, Vermont, to train and interract with Good Point Recycling staff. We sent 2 student interns to work with one of those technicians under the Fair Trade Recycling "e-Waste Ambassadors" program last summer (Middlebury College and U of Florida).

We are going to be card counters at the blackjack table...

And here is a paid Fair Trade Recycling Internship post to bring us there (please repost).

Environmental NGO Basel Action Network released an Opinion piece in E-Scrap News that may have put too fine a point on their offer to shakedown competitors.

"Responsible recycling companies can be plagued with downstream vendors that cheat on their no-export commitments. For this reason, BAN encourages all electronics recyclers to contact BAN to privately contract for our tracking services. We are ready and willing to help all recyclers and enterprise companies to audit their downstream partners."

"Responsible"... You'll be "responsible" all right.  Because if you read the agreement disclaimer, you'll find you could be held responsible if the NGO gets sued for defamation.

Here's our April Fool's Day Prank - How to use an MIT-inspired GPS tracker to make ANYONE look bad.  And the fun part is, you can do it for Ca$h! 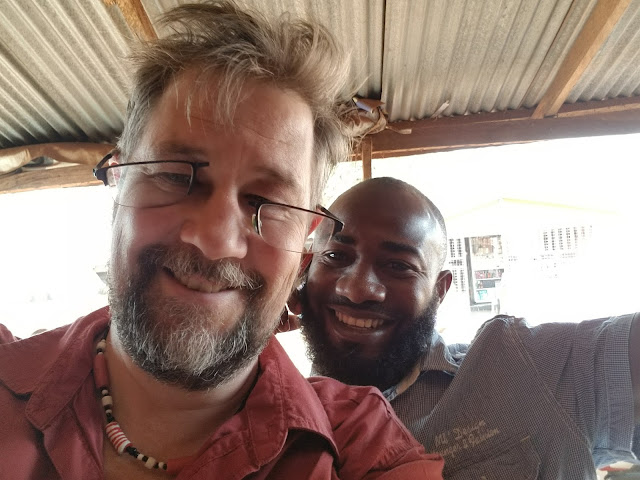