Let's End the Feud with Prison Industries over "E-Waste" Recycling.


I've made this proposal before.  But I recently read another company's blog about "e-waste recycling", and noticed they had several posts dedicated to bashing Unicor, the Federal Prison Industries program which makes electronics recycling cheap by using USA prison labor to take apart computer scrap.  That is "kinda now, kinda wow, kinda 2003."

There are two arguments against Unicor's prison recycling program.

The first issue is that the workers are somehow poisoned and endangered.  This is false.  False false false.  I don't even want to get into this, except to say that if private USA recyclers want to start a bidding war with the federal government's prison system about who can make a safer facility, they are shortsighted to be kind.  The Unicor facilities I have visited have waxed floors which may well have been cleaned with toothbrushes and tweezers.   These places are stone cold ISO rule-abiding recycling joints, and the only toxics problems they've had were from early years, when e-waste recycling was new.  Comparing a modern private facility to a decade-old Unicor operation just isn't a fair comparison, and it's stupid to make it.  It's typical of an immature industry to promote false rumors about competitors.


The second issue is that unfair competition from Unicor can skew the marketplace.  I agree.  Unicor entered electronics aka "e-waste" recycling when there weren't many vendor choices, and it seemed like an innocent place to put inmates to work.  However, I certainly understand the complaints when the Unicor juggernaut began bidding on military equipment and other high value surplus.  They were not going after hard-to-manage waste, and the people they were winning bids away from (like Global Investment Recovery, and at-the-time Creative Recycling ) were surplus property, not residential e-junk.  Larry Novicky, who directed the Unicor prison recycling program, was smart in a bureaucratic way, going after more profitable accounts.  But it sure felt unfair if you were a private guy who was bidding against someone who selected his bid with no knowledge of what his costs were.  He could bid a penny against you if he didn't like you, and had only the federal accounting office to be accountable to.  Rachael (our CFO) would take my head clean off if I bid like Larry.

In point of fact, I had selected warehouse space in Arkansas a few years ago, to open a second Good Point operation (probably in West Memphis).  Competition from Unicor in Texarkana killed the business plan.  True.

Nevertheless, I believe that certain e-waste watchdogs enlisted themselves against Unicor for neither reason.  I believe they were making a deal to get anti-Unicor recyclers to sign the Pledge of True Environmental Stewardship.  It was a backroom, political deal. 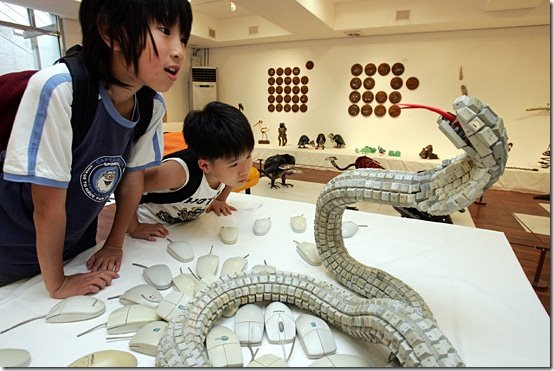 I used to say the best way for private recyclers to manage this was to hire Larry, take him out of the game, "cut the head off the snake".  Famous stupid words.   ERI did this, and Larry was replaced with Bob Tonnetti, the pre-eminent e-waste expert from EPA.  Yikes.  I am not batting 1000.

Is it bad for the prison to put people serving time into productive work?  Absolutely not.  Granted, I would like to see Unicor spread out its "talent" and do car painting, potato-peeling, gardening, grape-harvesting, sign painting, sock-sewing, etc... not put ALL of the prisoners into MY business.  And I really hate that the Food Lobby keeps Unicor prisoners from gardening.  It would be fairer to both business and the prisoners to put them into a bigger variety of careers.

To the degree Unicor is going to do electronics recycling, I have one word.  Keyboards.

Actually, there are other words.  Printer scrap.  Breakage.  Computer Speakers.  The very same stuff that gets sent to China by good, reputable, Pledge-signing companies, because there are such diminishing returns on the labor value, that is the feedstock Unicor should be going after.

Unicor could attract a lot of USA recyclers as an end-point for breakage.   The same market BAN has criticized exports of, but which shredders do a S****t job with.  It's a domestic alternative to doing proper recycling of low-yield stuff in low-wage countries.  I still like the idea of putting Las Chicas of the world to work on recycling, anti-mining jobs.   But I would grant that Unicor is better controlled.

So let's admit shredding certain stuff makes a fluff mess.   Lets send all of our gaylords of keyboards to Bobby T. and the Unicor team.  They can make them into Scrabble games.  Or make big Lithuanian e-waste sculptures.  I don't care.  I just know that paying Vermont staff to demanufacture keyboards and breakage, and shredding them, are both a waste of time and money.  Some stuff has to be done by hand, but you cannot produce minimum wage value by hand.  Let's call a truce with Unicor and do some business.

It was a toss-up.  This is the better song (Soggy Bottom Boys - Constant Sorrow).  But the one at the top had a still of prison convicts from the same movie, O' Brother Where Art Thou, and a topical jingle.

I watched the movie in Arkansas, home for the holidays.  Dad hated it, thought it was anti-south.  I loved it, the parallels to Homer's Odyssey with legitimate allusions to things I remember hearing about, like kids lead around on strings.

But the music... OH MAN.  I love Bluegrass.  I used to play it and tell the kids in Cameroun that it was my "aux village" music.

"Do not seek the treasure."  - "We thought you was a toad"... This may as well be dialogue in the ewaste community.  Ten years from now, after China is OECD, after people realize that Indonesian factories cannot both warranty the goods they make and enforce "tested working, fully functional", the current electronics recycling debate will make absolutely no sense.  Fine movie.  Thumbs up.
Posted by Robin at 4:54 AM