India Rag Recycling: Not so Shoddy

Taking a break from Africa trip, I reminded myself to USE TWITTER for its intended purpose.

Twitter isn't for writing, and reading every person you follow is about as edifying as reading a library card catalog. Booleans and keyword searches have long replaced the Dewey Decimal System.

Twitter is about the SEARCH box.   So for a break, I typed in "Recycling India".

BAM. BINGO.   A textile recycling city.  Tip of the hat to Tweeter Tim Mitchell of the UK.

APOLOGIES - I must redirect you to this site, still strongly recommended.
In place of the India photos I originally posted, I have put in several 60 year old Wikimedia photos of rag-pickers from Western cities.  Do visit Tim Mitchell.

I completely understand that an artist saying "yes" to one person can lose control of the images as they are found by other bloggers.   Fortunately, through Wikimedia Commons, I have managed to find practically the same photos (in black and white) as the activity shown in India, mostly taken in Britain in the 1940s.


At the thrift shop I managed for two years, we sold a lot of bales of used clothing, and found the market dominated by Indians, Pakistanis, and Africans.   My long lost chum Yadji told me about his family making treks to Lagos to buy bales of used clothing to bring back to his Cameroon village of Yenwa.

The Tim Mitchell link shows 28 photos taken at an Indian rag and clothing trade village, which I say defies the labels of "formal" and "informal" sector, terms made up by Western academics and then applied by the Chinese Communist Party to crack down on Taiwanese competitors with CCP owned factories. 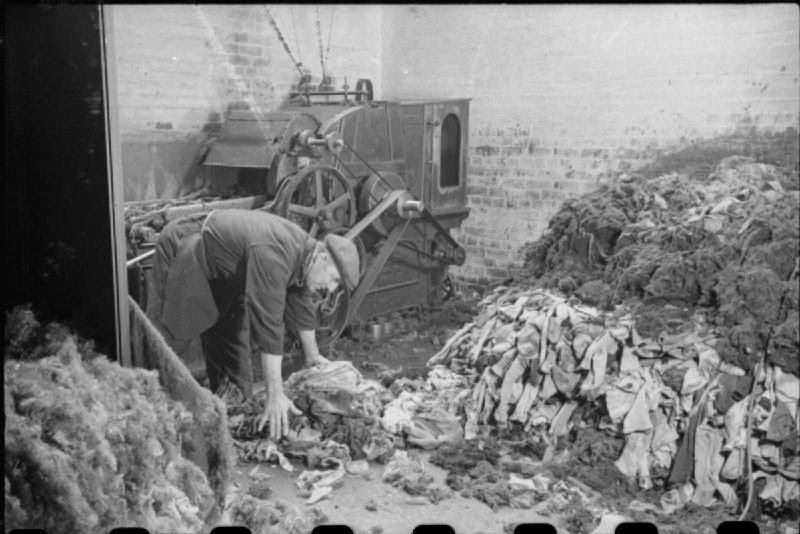 The mall photo or Mitchell's (#10) reminds me of the Cairo used Technology Malls.   The 28 photos show several links to different niches and segments.  One is actually the business of buying used India Saris, washing them up, and exporting them to the "hippy markets" in Western countries.

READ MORE »
Posted by Robin at 9:06 AM No comments: Links to this post

What is unique about "e-waste" and the jailing of #FreeHurricaneBenson is that environmental police are reacting to the same kind of panicked finger-pointing described in To Kill a Mockingbird.
Eco Fundamentalists - the proponents of radical fundamentalist Basel Convention Amendment interpretations (that anything with a circuit board is "waste", even if the circuit board is being reused or repaired or electively upgraded) so believe in themselves, that their leader actually says "Joe Benson is collateral damage".

Sure, and Tom Robinson was "collateral damage" in the war on rape.   Rape's such a horrible crime, that a "Willie Horton" description of Robinson is accepted for the protection of society.

READ MORE »
Posted by Robin at 10:27 AM No comments: Links to this post

Back to Africa / We Live in the Future

Got my ticket, my seat assignments, and going through the visa process.   And I'm working on a cluttered pile of photos and journals, hoping to turn some of my writing into something a little more mainstream.

From time to time though, I'll return here.  My goal is to make the blog shorter and sharper.   A lot of the posts have emphasized the same point, rewording the collective outrage of the geeks of color in different ways.   It can be done humorously, like the April Fools "African Matrix Blog" (scarily foreshadowing the methodology of the E-Waste Tragedy "scrapumentary"), or with college thesis flair, or angrily.    But the goal now is to provide insight in modest bites.

Here's the key difference between exports of used electronics to African and Indonesian geeks and the exports to the ports controlled by (mostly Taiwanese) businesspeople in China.   The Chinese market, in the 1990s, was more like Africa today, importing for direct reuse and consumption in Chinese cities which could not otherwise afford brand new product.   That's like used German cars being sold in Poland in the late 1980s, or used brand name appliances to Russians in the 90s.   That's what Hurricane Hamdy, Hurricane Benson, and other African traders have been engaged in.   It's pretty simple, a secondary market taking gently used and electively upgraded material from wealthy neighborhoods and reselling them in emerging neighborhoods.   Salvation Army, Goodwill Industries, St. Vincent de Paul, eBay.

(Here's some background music by Ken "Bundy" Brown via Youtube.   I'm a huge fan of Leo Kottke and Ry Cooder, and would place Gray Market Goods in that style or vein.  His older stuff is a more Little Feat-ish.)

READ MORE »
Posted by Robin at 12:36 PM No comments: Links to this post