The Fireworks Economy of Agbogbloshie, Part 2

Fire is the dynamic that attracts teenagers and young men to a wire burning site.  Fireworks economy.  Build a bonfire, attract a crowd.  The wages at the wire burning site on the Odaw River are so low because 1) the youth suffer chronic unemployment and, 2) burning wire adds very little value. There less plastic on the wire, which makes it worth a little more, but the clump of wire weighs less, because the plastic is gone.

Who else is attracted to fires?  You got it, photojournalists.


Shin is from South Korea and came to NYC to study photography, according to his bio.  His instagram and twitter feed was all about wire burning, and I'm sure he's the "China Man" the Musketeers told me about a little while ago.  He seems like a nice guy.  Not a credible scrapyard expert (see Adam Minter or Jon Spaull's reporting for that), but at least gets the jist of the philosophical question of whether photojournalists wars can create "collateral damage".  Seems sincere in understanding the pitfalls of "photographer protagonist". 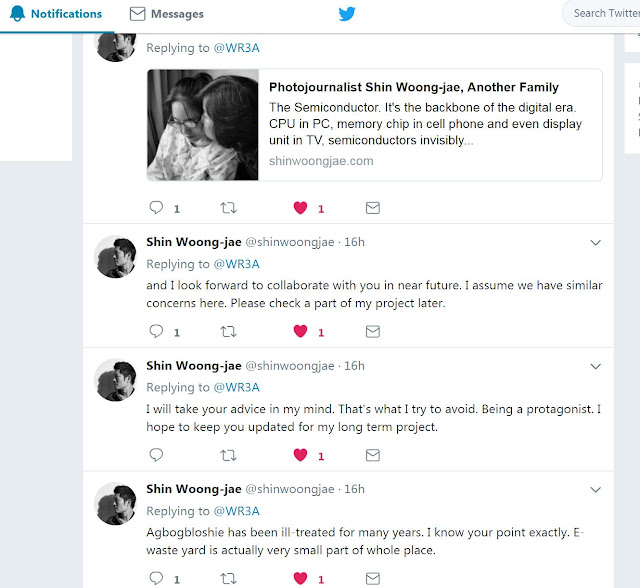 European and American NGOs and Regulators who are entranced by the flames at Old Fadama's "Agbogbloshie" scrapyard have three main boogeymen.  Many argue that sales of used goods should be banned to Africa based on public concern over three "questionable" practices:

So many documentaries have now been filmed with close up camera shots of each of these, that we receive RFPs that ban our company from doing work unless we promise not to do business with Africans.  As someone who lived in Cameroon for 30 months in the 1980s - and is still in touch via Facebook with my landlord from the small town of Ngaoundal there after 30 years - this "segregation" of business distresses me greatly. 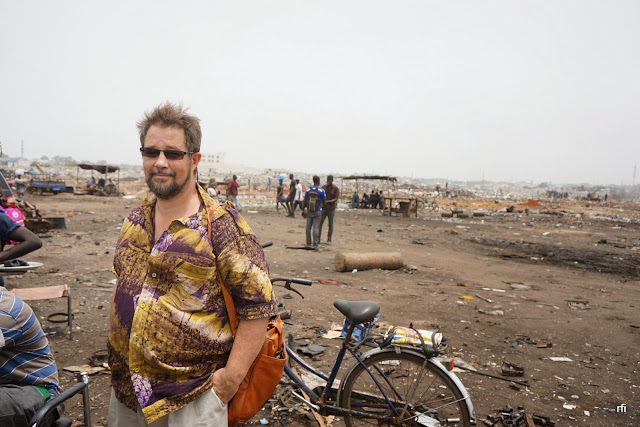 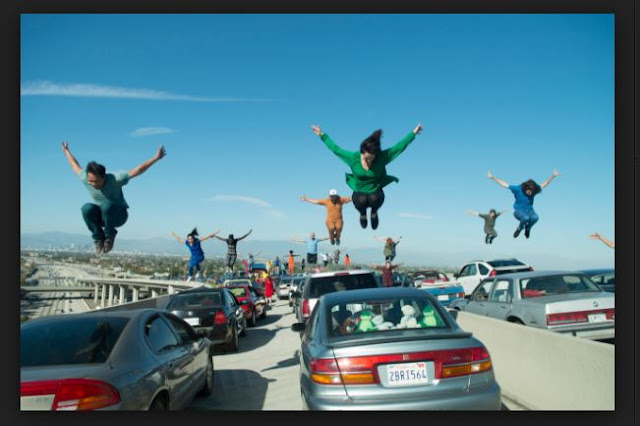 There are two really good things about Twitter.  The First One is the "search" box on the top right.  It allows you to research an obscure topic (like "Why is Taney County Missouri named after the Dred Scott Case Supreme Court justice Roger B. Taney, and why are they pronounced differently?") and meet someone across the globe who is also tweeting about the subject.  You might have found the same article through a Google search, but it is very hard for a recent article to move up Google's ranking, and virtually impossible to pass Wikipedia etc.  But enter "Roger Taney County Missouri" in Twitter search, and you'll get some very recent and current insight and thinking on the matter.

The second good thing about Twitter is it forces you to be brief.  It rewards "pithy"

So most of the "facts" about African e-waste and Agbogbloshie that you find on Twitter are just retweeted BS.  But add some other key words, like "Dagbani", and you can meet someone through the smoke and fog who also sees what you know about the place.

Most of the photos on the web of traffic in Los Angeles are actors in colorful wardrobe, dancing on the tops of their cars in @LaLaLand.

The German phrase for the guilty pleasure of rubbernecking - observing another person's tragedy with chilly over-interest - is now part of the American lexicon.

But is there a similar good German phrase for "discomfort with other peoples increasing affluence"?  It's different from jealousy (which is the discomfort with affluence or conspicuous consumption, but relegated to those who don't enjoy the same - the "have nots").

People we have always thought of as "poor" start to resemble - well... - US.  And today's NYT article wants us to see that as a bad thing.