Part of me knows the way American Hillbillies were portrayed.  My kin certainly had a chip on their shoulders.  But on the other hand, I do understand that to run a company or a non profit or NGO or government organization, you gotta do some things that you gotta do.

Environmental writer Dave Currey posted a blog this morning which, I think honestly, takes up the same ethical questions about what I call "nurture packaging" or "victim manufacturing".  It's the first time I've read Currey's blog, and I haven't been much deeper into Environmental Investigation Agency (a non-electronics EIA)  that Twitter or Animal Detectives.

But since I've been dishing out a lot of criticism of photojournalism in the #ewastegate hoax, it's time to take pause and recognize a thoughtful, ethical post about how photography drives fundraising, and how ugly the fundraising business is.

Currey sees it.  And in my interviews with StEP, BAN, and R2 staff, they are aware, too.  The business of "solving a problem" or cause-based fundraising is a tricky ethical maneuver.  At a certain point, "ethical professionals" need to send "ethical passionates" out into the field to raise dough.

My retweets of Currey's blog center on the power of photojournalism, respecting the way it leverages exoticism and nurture, but also calling on ethical scrutiny.  The photos sent out by NGO Basel Action Network in 2009 were used to manufacture a "hoax" victim - Africa's "Eden".  Greenpeace also filmed ludicrous claims (by AMA "journalist" cough-cough Mike Anane) that Agbogbloshie was a lush fishing and swimming greenfield before used electronics were imported.

Where are We on the Ethics Spectrum? 6 Degrees of Environmentalism

What's the purpose of this blog?  I often meet people who share the interest in ethical exports and electronics recycling, and we exchange information, each developing deeper knowledge through the relationships.

But the blog is also a journal.  It can capture my own thinking about a "big story".

And "e-waste" is really not a big story at all.  It's a fairly small part of recycling,  Recycling is really important because it avoids mining and preserves added value.  It's really rude to future generations to burn up limited fossil fuels, warm the planet, and then throw away the metal and plastics and do it over again.  It's really rude to tell a generation of Africans starving for Mass Communications / teledensity that they should buy brand new stuff most cannot afford because our sense of liability - an ethical luxury - comes first.

Throughout the blog there are facts that I share with academics and researchers and policy makers, and then there are places where I get angry and vent - as I'd do in a journal.  What is most important are the big perspectives which I can only comprehend a bite at a time.

Recycling policy becomes a lens to view ethics in a way that observes cross-cultural and economic interest's "spin" on those ethics.

Ethics really have to be understood as coming from a source of good, a right and wrong, poles.  It's possible that the most cynical view of ethics - that it's all evolved psychology and genetic nurture and greed - is true.  We have to be willing to consider it.  But I think an evolved, polished, enlightened Ethics which takes into account evolution and psychology and enlightened self interest is a thing of beauty, a work of art, and a gift to future generations.

Another long intro leads us here: My outline of self interest in international ethics.

[thanks to virtual pal Rafa Font of Belgium for sharing the article by Courtney Martin, The Reductive Seduction of Other Peoples Problems] 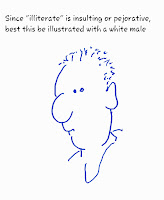 We tend to call people "evil" in literature, but most of the evil I see in the world is more of an ethical blindness.  People who really just care about something else, about themselves, about money, about pleasure.

There are people who would eat 1,000 endangered species tongues on toast and throw the rest away just for the sense of privilege, power and luxury (and even if cheese tasted better).  But in my experience, assholes aren't really thinking about ethical questions.  They would as soon burn a phone book as a Bible.

The worst problems in the world aren't created by Marvel Comics evil people, but by those who are mostly illiterate in ethics, and don't know how to feel good about sustainability.  The action is evil, the murder is evil.  What's in the evil mind is a waste. 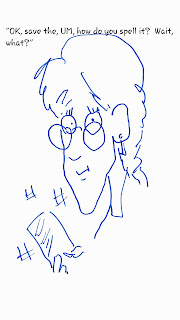 There are many people who have a general awareness of ethics and are on the right side, they think.  But while they may be literate in right and wrong, they don't really read novels, if you get my drift.

The morality is often a currency which they see has a social value.

They want to be friends with people who are ethical (which is really smart), and they follow the opinions of the tribes they find themselves in.

The Ethical Superficials may evolve into more professional ethics agents, or they may be satisfied to see themselves as ethically superior to Ethical Illiterates, earning an internal "moral currency" for having expressed "politically correct" or "religiously correct" views. 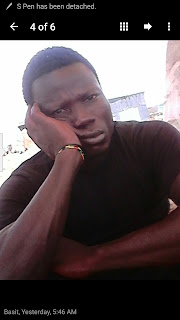 If you've been following the last 8 blogs about Agbogbloshie in Ghana, you see the tricky place we are approaching.  If the slum dwellers in Accra are burning wire for less than $3 per day, does chasing away the photojournalists do more harm than good?

There's this sense that photos have value, and a sense that some kind of exploitation is going on.  But it travels like a rumor, and the Africans are conflicted in whether to participate or boycott the photojournalists.  It's part of the #charitableindustrialcomplex that they know is "happening" but don't really understand how to monetize.

If the hyperbole about the  "largest e-waste dump on earth" goes away, if the source of the scrap in Agbogbloshie is not "hundreds of containers from sham recyclers" but just pushcarts collecting junk from a city that had 20 TV stations 20 years ago, where does that leave Razak, Awal, and Rachid, the scrappers we did Q-method interview with on film last spring?

Are they still "important"?

It's a tricky thing.  They have no problem at all "outing" Mike Anane.  The scrappers clearly can't stand the guy. Every time Anane's name or picture came up, Awal's crew would begin talking over each other, standing and yelling.  That didn't come from me.  "HE DEY LIE!" [he lies] It was cried with emotion because they knew what Anane charges for his "photojournalism tours", they know his bogus relationship with the idealist young journalists like Kevin McElvaney, or "BitRot" Bellini, and with Jim Puckett and Lord Chris Smith etc... and they suspected it was part of the "Sodom and Gomorrah" propaganda campaign to evict them from their homes for the Accra Metropolitan Association could take the land over and develop it with hotels, malls, and office complexes. 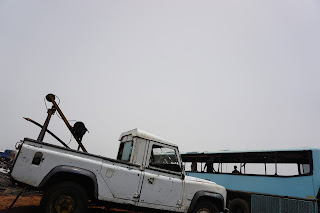 While the NGOs stay stuck as depicting Africa as a place that couldn't possibly be the source of its own junk TVs and computers - despite World Bank data and history of mass communications investments in the 1970s-90s - I thought I'd take a closer look at what we saw in Agbogbloshie.

Metropolitan bus scrap.  They have been towing junk automobiles to Agbogbloshie for so long, you even find tow truck scrap.

And motorcycle scrap, and scrap tires, and car doors. 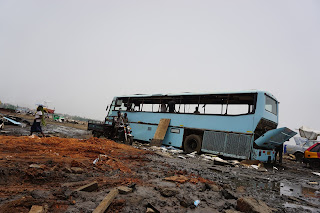 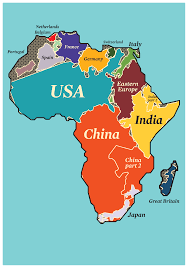 This is true on so many levels.   For starters, Africans not born in hospital are often undocumented until they enter primary school, and mothers often recall the birth year and state new year's as the birthday.  Many famous Africans (including my personal favorite, bass soukous guitarist legend Shaba Kahamba) celebrate their birthdays on New Years.

It's also a wonderful continent to visit in January.  It's warm.  Rainy or dry, there are plenty of sunsets and blue skies between thunderously heavy, Disney-esque downpours and showers.  In Ghana it's dry season, but not yet too dusty.

The New Year's Eve is a common holiday, Christian and Muslim and Animists feel comfortable celebrating together.

At an almost metaphysical level, Africa has a growing number of women acting in politics, and you know what that means.  Compromise.  Progress.  Diplomacy.  Splitting the difference.   And the more women who serve as either head of state (Nine African Nations) or in major positions of government, the more Africa puts its New Years Resolutions in order.

What we know about the "e-waste crisis"?  Every point below has been documented and footnoted in this blog in 2015, with photographic evidence (see photoessay in National Geographic YourShot).  Documenting it takes a lot of time, but I've done it.  In 2016, let's ask anyone who makes a living protesting "e-waste" to refute or respond to the following points.

If you are a data journalist working on the story, there is definitely one here, and it hasn't really been reported.  Most of what's been repeated about "e-waste exports" in the Western press is a hoax.

Resolve to end the Boycott of Geeks of Color ...  Eight Ewaste Facts for 2016