One of the most tiresome themes in the "eyewitness" reporting on African recycling are accounts of smoke from burning wire.  It's definitely one of the most photogenic activities at Agbogbloshie.


The anecdotal wire burning in Agbogbloshie is a product of underemployment and boredom. But if you ask people in the recycling community how much e-waste wire burning contributes to African urban air pollution (smog), you find it gets mentioned a wee too often.

Where smoke comes from:

I asked German photographer Kai Loeffelbein a polite question on twitter about the photo below - from Agbogbloshie.  No response.  I presume he has done just a little bit of background research, enough to know not to climb in the ring.  He's going to ring the bell and get his cash from the publisher for a titillating expose, and let's see if a dime goes to Ibrahim, Muhammed, Awal, Razaq, Yaro and their pals.

So let's talk about smoke.  The photographers like to tell us that's how their work is benefitting the Africans - by saving them from health effects of burning electronics.
We don't want to sugar coat it.  We just want to put the issue in perspective.


Seen up close, these trash fires look like they support the headlines in the google snippets below:

From the UK's Guardian - 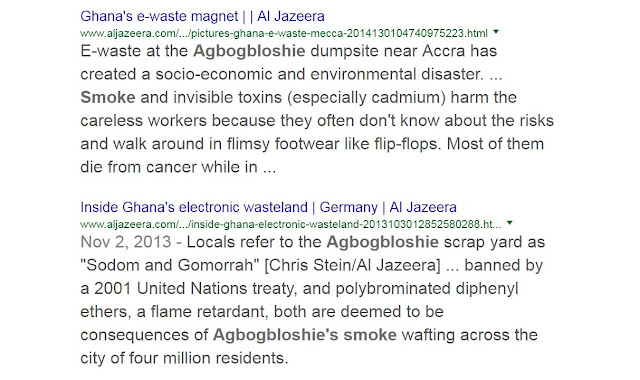 And from Blacksmith Institute (PureEarth.org):

It's mostly about the smoke.  I have not found any of the sources for the claims that most of the men I met will "die of cancer in two years" (none I've met so far have, in my 4th annual visit).  But I tell the guys it's just not worth it.  Get a job in construction or something.  And I found 3 of them two different jobs (see blog-end), but they keep returning to the fires.

Some perspective, here is the wire burning area, from the short distance between the much, much larger pile of coconut husks area, burned separately (ubiquitous Awal Muhammed in the foreground). 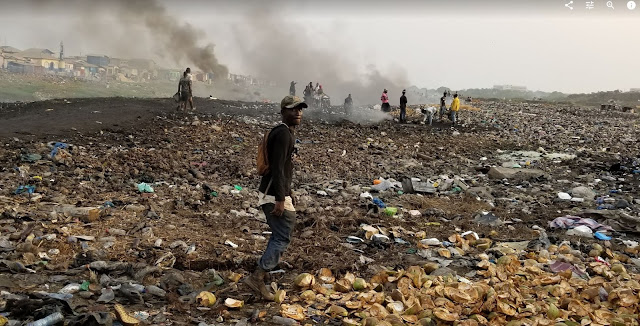 Young men, teenagers to early 20s, burn stuff in countries all over the world, and we don't ascribe it to OECD avoided cost drivers any more than we do graffiti on walls.

The photos of the burning tire, wires, or coconut shells show how a single tire can generate more smoke than all the computer wire burned in a day.  And as we've seen on this blog, there are a LOT of tires in Accra.

But for even more perspective of Agbogbloshie's wire burning area, here is drone footage showing the burning area where the 25 young men are managing tires, wires, and coconut shells... center left.

And here is the City of Accra... A greater metropolitan area of about 4 million residents, where these 25 guys are described as being a very important point source of pollution. 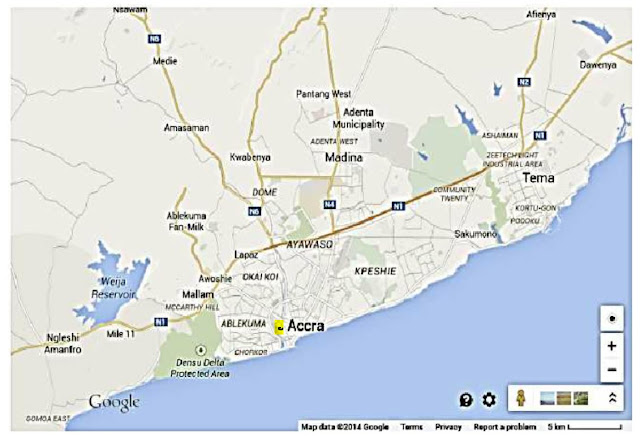 I tried to mark in blue pen, with yellow highlighter, the slum area of Old Fadama and Agbogbloshie, but it's really too small to color in the lines and what I marked is much larger than the automobile scrap yard, electronics scrap, waste dump, and shantytown combined.

What amount of activity at Agbogbloshie is for the purpose of entertaining photojournalists is a matter of speculation.  They do normally use some gasoline, in a plastic squirt bottle, to start the flame.  The 3 Musketeers say they use more of it when photographers are around. One thing they do NOT normally do is what Sasha Rainbow requested.... Pose at night, with gasoline slushed through the tire, holding it above their heads (Awal Muhammed of Savelugu, below). 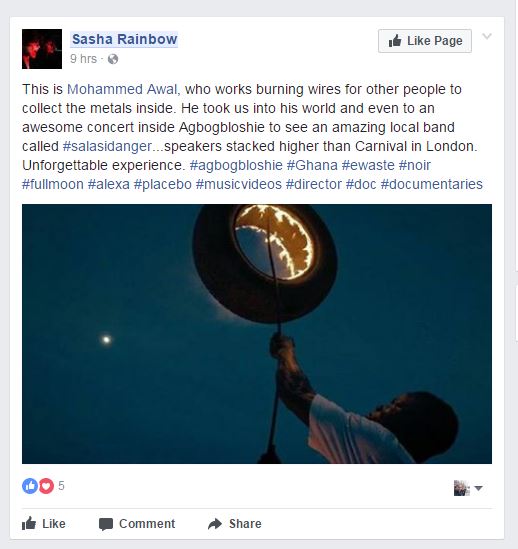 So back to this list of causes of smoke...  Just how is an export ban on used electronics going to improve air quality in Ghana?
Wire is not on the top five.  Burning plastic and daily trash (in ZoomLion dumpsters) and even small metal smelters (see below) rank above wire burning when it comes to worrying about soot in the onion market.

Most of the wires burned at Agbogbloshie are automobile harness wires, not even electronics wire.  And most of the electronics wire is from appliances thrown out by millions of Ghana households who were cheering the world cup on their TVs in the 1990s... in "home used" appliances that created the critical mass of users for media investors, and drained the capacity of 5 hydroelectric power dams constructed since 1960.

The percentage of smoke from the unrepairable electronics imported for reuse is very small indeed.

Not without toxics, not excuseable, not something we want to ignore... Just ludicrously small, given the scale of press devoted to the subject.

Photographers need to do background research.  They will find this is not about imports and exports, it's about exoticizing a situation to make Western readers feel guilty while making Africans look "primitive" and "ghoulish" and "scary".  It the worst form of all photography.   Kai Loeffelbein 's term is "post-apocalyptic", and "appalling" and states on the record that it was "illegally exported from the West in order to bypass expensive recycling."

Kai should have known the NGO source abandoned statistics they had issued years ago. But at this point, no matter how the old VCRs and CRT TVs got there, purchased brand new or secondhand and used for decades or what, the point is that they are a bug bite on an elephant's ass.  They are not a primary source of the pollution which the artist, perhaps with best intentions, seeks to draw our attention to.

This brings me to the Ten Commandments of Portrait Photography, by Michael Comeau, which Kai Loeffelbein directs us to on his own Twitter account.

1) A Portrait Is About the Subject, Not the Photographer

2) To Call a Picture a Portrait, You Need Consent

3) A Portrait Is About a Person, Not How They Look

5) An Effective Portrait Makes You Curious About the Subject

6) We Learn from the Masters, Not the Latest ‘Influencers’

7) Ideas Are More Important Than Technique

8) Technique Is More Important Than Tools

9) A Portrait Does Not Have to Flatter the Subject

I asked on Twitter whether Kai Loeffelbein followed these rules in his photos of Agbogbloshie, Guiyu, and Dehli?

Fires are photogenic, and can cast an interesting light on the subject (as seen in my photo from the weekend of copper jewelry makers in Tamale, below0  But it makes a good firey photo even easier to sell to an editor if you can wrap it in social injustice, salt it with Upton Sinclair, and literally shock the consumer who was feeling good about donating or recycling a computer.

If we are actually really concerned about SMOKE and toxics and releases of pollution, doesn't it greatly harm the effort to mis-attribute the pollution in order to sell your photos?  And what are the ethics of telling a false narrative about the subject, making money from it, and not sharing a dime with anyone in their country?  What is the role of used electric stoves, run from hydroelectric power, in reducing the charcoal kitchen fires that tear me up every night?


I understand the photographer needs to "sell" the series to an editor. Jacopo Ottaviana coughed and wheezed and pointed to the onion markets that would be contaminated by the soot.  Countless eyewitnesses describe the choking fumes of the burning.  But the simple fact is that unless you've been told by a photographer to stand in the path of the smoke, you have a stick and stand away from it. And if you are feeling it from a block away, that's truck fumes, diesel generators, stove charcoal, trash burning, and tires you are experiencing, not "e-waste hell".

African cities have bad air quality.  Not as bad as some Asian cities, but at certain times of the day, there's ugly grey phlegm in your throat.  It has almost nothing to do with e-waste.  Uf the readers of your photo essay come away thinking that recycling their electronics is harming African children, you've basically achieved fraud.

At the IERC in Salzburg, I spoke with an official about wire burning in Africa.  He thought recently imported wires burning was the main air pollution problem, and would be a simple matter of arresting young men who burn wire.

Setting aside for a minute whether Africa needs any more policemen, I told him it's a crime like graffiti which wastes a lot of court resources to prosecute.  But here's the more important thing - he thinks wire burning is a big problem because people keep talking about the smoke in Agbogbloshie.

A little self-Ctrl X would go a long way.