Toxic Non-Recycling: It's the mining stupid 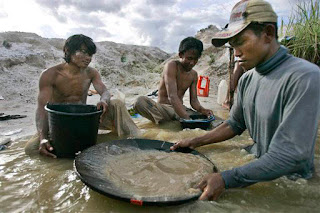 It reminds me of the biggest story of 2009, when Jakarta Post showed us pictures of miners using handfuls of mercury to "float out" gold specks in a river.   The shocker?  THIS IS RECYCLED MERCURY recovered from lamp and electronics recycling plants in the USA!  A recycling crime?  Actually, an accomplice to mining.

We already knew that hard rock mining of metals produces 45% of all toxics produced by ALL USA Industry.  We already know that Chinese metal refining is a Terminator.  The production of rare earths in Chinese smelters is kept under a curtain.  We already know that coltan mining (for cell phones) in Congo kills gorillas, we know that the OK Tedi copper mine in Borneo clubbed a fishing village to death, producing toxic flumes visible from space.

Our recycling industry needs to look in the mirror and ask ourselves why, when the Guangzhou virgin lead ore smelter overflowed and poisoned the Pearl River and hundreds of thousands of people were left homeless in 2006, why we were more interested in the tiny, marginal story of Chinese recycling poison.  I am not apologizing for toxic recycling processes.   But in the scale of the tragedy, mining and refining virgin materials kills an poisons millions of people in poor countries.  Those countries need metals.  Oh, and also greedily desire metals - most gold mining (the worst offender) is for personal jewelry. 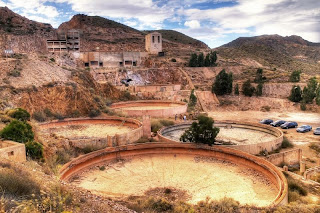 My theory is that environmental science is in a scatological phase.   Early western medicine cared more about poop than about nutrition.  Environmentalists mean well, but we are studying society's poop instead of what society eats.  We want to eat recycled feedstock, and we want all societies to eat recycled feedstock.  That is a recipe for reforming recycling, not ending it, wherever it is occurring.  If in the USA - great!  If in China, great.  I don't care where it happens, I just want more reuse and recycling and less mining and refining.  California?  Perfect.  Just follow the waste hierarchy - reduce, reuse and recycle - and follow the chain of effects in the global marketplace.

Every zip code with a mined raw materials smelter has more to worry about from the smelter than from the recycler.  That's obvious to us at Doe Run in Missouri.  Why is it different when it happens overseas?

I'm 48.   I don't have time to be polite.  I will rub people the wrong way and hope that some college student with less John Brown-ish manners will seed the plowed soil with more approachable ideas.   The fact Americans continue to spend billions to divert mercury lamps from secure lined landfills in the west to sell mercury to alleuvial gold miners in the tropics, who sell gold back to us to make watches and rings, is hideous.    And it's not carbon neutral either.  My Halloween costume?  A gold wedding ring.

Reforming and investing in proper recycling practices overseas is NOT about making "e-waste" recycling cheaper in the USA, though admittedly it does do that.   It is the reason I got in to recycling, when I stood in front of the Fayetteville Arkansas Board of Selectmen in 1979 and gave an impassioned speech on behalf of the Fayetteville Recycling Center (which needed a new can flattener).

American Retroworks Mining Factsheet
Posted by Robin at 9:07 AM