California is about to get an urgent invitation, signed by WR3A and BAN, and all of our friends, asking the state to return to the recycling waste hierarchy - reduce, reuse and recycle.   California environmental regulators are not criminals, they are not enemies.  They wanted to do the right thing with SB20.  They wanted to make the world safe from "e-waste".  The Department of Toxic Substances Control interpreted the Basel Convention to mean "no intact unit", when what it says is that working units are commodities, and not wastes.  EPA follows that, but requires proof of acceptance, and also diligence (recordkeeping) that the CRT is ultimately reused, and not discarded).  I have failed dismally to simply and effectively explain the reuse and recycling business of my friends overseas.  My friends overseas have hidden and sought refuge underground, rather than stand and be counted.  And I believe some advocates have been too slow to object to destruction policies committed in their name.

Sunrise.  It's a new day.  Russian and American and British soldiers are reuniting in Berlin.

It is strangely safe, while appearing to be courageous, to be "waging a war against friendly fire".  The instant an American trooper starts firing at his own personnel, the fog of war becomes the problem and the dispute with the true enemy is put on hold.

The very instant your ally stops shooting at your friend, he is instantly still your ally.  A soldier in Falluja who is shooting at another soldier demands 100% of the battalion's attention until the second he recognizes his comarade and stops firing.  At that instant, he is your colleague again.


What you do not want done to yourself, do not do to others.

The importance of a victory for reuse advocates should not be exaggerated. I was speaking to a recycling engineer who lives in Mexico, making huge shredding machines for off-spec equipment (he's a strong supporter of WR3A and our Las Chicas Bravas experiment).  We were talking about the dangerous environment in Mexico, and the war of drug traffickers.  We both love recycling, and we both love Mexico, but the context of our recycling cause is put into sharp focus by the calamity of the Mexico drug conflicts.  Thomas is from Spain, I'm from Arkansas, but we both know that our nation's demand for cocaine and marijuana are the fuel to this ghastly fire in Mexico.

Thomas remarked that whether or not someone will murder you can be counted in dollars... if they hate you enough, he was saying, you are not even safe in Europe with $500,000 on your head.  But in Mexico, the economy of human life is suffering.  With so many murders, life seems not worth as much to save.


To go beyond is as wrong as to fall short.

Intellectually, saving a life on a battlefield, or the last of an endangered species in the forest, is worth more because it is rare.  But psychologically, surrounding yourself with destruction desensitizes us to loss.  If a homeowner seeks his laptop broken at the donation center, he feels tragedy.  If a man running a shredder sees one more laptop either go up the conveyor, or be pulled out to donate to a child, it's hard to get him to care as much.  Our challenge in California, having built an industry which resembles a slaughterhouse, will be to get those in the trenches to think like a zookeeper.


To see what is right, and not to do it, is want of courage or of principle.

That's a digression from "friendly fire", but a life taken in accident or from misunderstanding is a special tragedy.   A doctor performing the wrong operation, a misdiagnosis leading to death, a father reaching out to grab his son from a precipice and scaring his child over the ledge... these are a special kind of tragedy which is different than the murder, revenge, calculated for position in the Mexico drug wars.


Ignorance is the night of the mind, but a night without moon and star.

Too rare, the happy ending.  It seems like crusades for peace, for an end to conflict in Palestine, or an end to hostilities in the Afganistan, for friendship between Pakistan and India, or even peaceful dialogue between French-speaking and English Quebeckers, too seldom end.  As rare as an October firefly, it seems, when the press reports on the end of a standoff.

This post is another bit of indulgent introspection.  But this moment, I feel as if two comarades have a chance to walk out of the fog of war, and look each other in the eye.   Neither has killed or wounded the other, neither has gone without firing bullets back.  In setting down their weapons, and recognizing their alliance, each must think of the parable of Jesus... that he is facing in the other, the Prodigal Son.   For each, the other's compromise looks like reform.  But really, the two soldiers who mistook one another for enemies were equally mistaken.


"Be not ashamed of mistakes and thus make them crimes."

As a Brit, I have shot at Yankee soldiers.  As a Yank, I've shot at British soldiers.  The best thing is to forgive quickly, recognize each other as an ally against a common foe, and leave our differences to be resolved later.

I'll spend the rest of today trying to make sure that the California Compromise goes off without any other injury.  Differences remain on the export for repair standards of E-Stewards and R2, and the analogy of the father suspecting an overdose from mother's medicine won't end soon.  The machine of destruction in California will be hard to stop, even with the compromise.  With 9,000 CRTs being destroyed as "e-waste" every day, using taxpayer dollars, we may wind up with a "Schindlers List" of reuse... the ones saved for reuse, worth saving, but a reminder of the unintended consequences of a decade of "no intact unit" policies.


To go beyond is as wrong as to fall short. 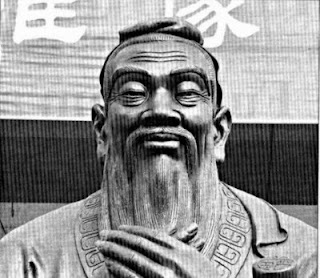 I was looking for a different quote from "Confusious", but I think this one is good.  The quote I feel certain that he said, but will take credit for myself if necessary, will be:


"When two good people exaggerate their differences in order to seem like better people, the lesser people win" (Robin Ingenthron)

But there is no racism intended by Basel Action Network, and none by ISRI.  By working together to salvage working computers from certain an stupid death under SB20, we can hopefully make common ground.