Slums and Recycling and Environmental Justice

I ended last weekend's post with the observation that rich markets don't nurture the skill to repair devices.  We can buy new and be happy.  Unfortunately, environmental stewards are designing export rules and systems based on what we (the wealthy) are willing to do, not what they, the Techs of Color, are ABLE to do.. 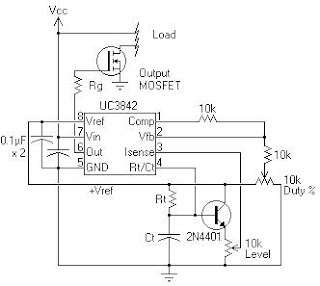 Last Sunday I was re-watching Slumdog Millionaire, telling my kids about the societies that grow around dumps.  Like the Egyptian Zabaleen, the lower castes in Philippines, the Indian tribes in Brazil profiled in last month's New York Times, the repairmen of Bangalore, or the "slumdogs" of Mumbai... Whenever I see them, these illiterate, often orphaned, primary school drop outs, I think of the opposite.

I remember the best and smartest students in my classrooms in Cameroon, Africa, reading "Technical Textbooks" in "technique" classes.  Beefing up on schematic diagrams, electricity, currents, and physics in a classroom without even a light switch.  It was the most stubbornly smart students, earning "As", that I thought about most when I left my post.  Where would they find jobs which would reward that creativity, knowledge and patience?

It is, in my view, God's plan that the smartest kids fix and repair and salvage value from the richest kids.  It's a far better vision than the rich kids donating working equipment to the poor kids.  You actually want the smart kids from the classroom in Cameroon to be the ones that next generations emulate, who succeed more than "functionnaire" classes, law enforcement, or criminals.  This is the way South Korea, Singapore, Japan and other nations went from backwards to emerging to developed nations in record time.

Better or worse, Americans and Europeans have some intense and conflicted emotions when it comes to the relationship between recycling and slums and "environmental justice". 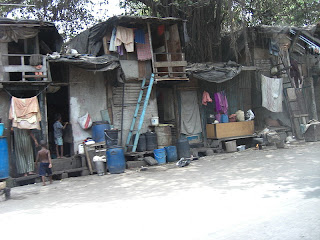 Here is a story from a few years ago about the electronics repair culture in Egypt.  The same disdain the Indian authorities have for the boy in "Slumdog Millionaire" can be seen in all these other cultures where very large urban areas create a waste stream which scavenger cultures can earn a living in recycling.

I don't disdain people who work hard recycling.  I am able to control the "shame and guilt" reflex, which also serves me well among Vermont deer hunters, Arkansas chicken farmers, and people in wheelchairs.  The idea is that you don't let your own subjective paranoia irritate the life of the people you meet.  Dudes, we'll all be dead in a few decades, let's get along and trade and do neat shit together.

My first time in China, I stood at the back dock of the hotel in Guangzhou, looking at a 4 cy dumpster.  I watched as a small packer garbage truck with 5 uniformed men backed up to the dumpster - three were in the cab, two rode standing on the sides of the truck.  They were met by 7 uniformed hotel staff.  Together these 12 men rolled out a 30 square meter tarp, and tipped the dumpster over by hand.  They sorted out all the garbage by paper, glass, metals, food... and arranged them in sedimentary layers for the garbage packer.  I guess when it unloaded (which I visited later that night) they would find it easier to sort again. 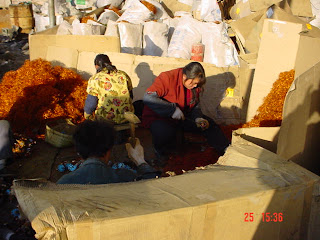 So, I know both something about the extreme conditions people in these countries live in, and given those conditions, how easy it is to exploit their poverty and their need.  I also know their intelligence, their ability, and the importance of retained and added value in their income. Fair trade and reform is delicate surgery on the free market, and good intentions are not enough.

"Without mandatory testing and controls, re-use can be pretext (intentionally or not) for exporting junk."

So true, dudes.  WR3A strongly agrees with BAN on this statement.  We differ on what the "tests" are, in some cases, but will accept numbers and data about which method got the most good stuff for the least environmental cost.  I mean, we KNOW mining and refining and manufacture and disposal..  We got that beat with our recycling eyes closed.  But whether the WR3A audited-end-market or the BAN audited-shipper works best, let's look at some control groups and some numbers and figure this out. But where BAN and PACE went astray was in failing to include the importers, the "Tech Sector", in defining those tests.  The best and brightest should be writing their own purchase orders.

We know that WITH mandatory testing and controls, re-use can be pretext for exporting junk, as demonstrated in the previous blog.  Or the exporters just declare it all "tested working".   Or the recyclers shred it and don't bother testing something that "might" fail.

"Export for repair can involve export for disposal."

Sometimes imports don't work out, new, tested working, or not.  Brand new devices are returned about 10% of the time in the USA.  WR3A has sought to establish progressive policies encouraging or requiring recycling of the parts that are replaced.   This is commonly required already at contract manufacturing factories which assemble and test new products (some fail or are damaged in assembly, and are recycled), and required of these factories when computers and monitors are sent back for warranty repairs.   As posted in the "Capacitor Wars" blog, the parts BAN objects to can be extremely small and non-toxic.  Some repairs, such as degaussing and bypass, require no replaced parts whatsoever.   Therefore, the conclusion that "fully functional" is the definition meant by Basel Convention's language "repair and refurbishing" (allowed) is an overreaction of dramatic proportions.

Unlike the statements above, BAN does not qualify this statement with "can", "may", or "might".  "Loves watermelon and fried chicken" might be a true statement.   But if BAN states that this is the outcome in all cases, they are prejudiced.  Retroworks de Mexico offers $5 off of any working TV (re)sold if the Mexican consumer brings in a junk one, in our "coupon for clunkers" program.  Our partner in Asia started out recycling incidental breakage for WR3A (which the shipper pays for), and they are now collecting from in-country in pretty large quantities.  ITIC -  I Think It's Cool!

If I export a used electric guitar to my friends Fela, Franco, and Aurlus Mabele, and they replace the amperage to meet 220v current, replacing the 110v switch, and I take the old power switch back in the USA and dispose of it safely - according to BAN's schematic, I have committed an environmental crime.  It's too mad that these soukous musicians know way more about electric guitars than I do.  I need to hire a white American soukous guitar expert here in the USA to make sure the guitar is tuned.


"Exporting toxic equipment for reuse to poorer consumers equates to 'passing the buck' and environmental injustice."

"Equates"?  I think brand new ones also eventually "equate" to needing repairs, which may equate to a part being replaced or upgraded, which will equate to recycling.   Ok.  So I stay barefoot and pregnant until you get around to LEASING me a brand new computer?

Locating an itty bitty capacitor which was replaced, or a 128k RAM stick that was upgraded, and pointing to it as the "outcome" of trade is such a hyperbolic description of fair trade that it makes me crazy.

If an Egyptian hospital intern buys a brand new $800 PC on his $3k per year salary, is that a better outcome than if he can get online with a $80 PC? "Let them eat cake"? The solution is 1) get the student online, and 2) get him a recycling infrastructure.  In that order, dude.  Like USA and the developed countries did.

Any form of ownership, of tested working or brand new, eventually "involves" recycling and disposal.  Here,  "recycling or disposal" are grouped in the sentence as if these are morally and environmentally the same outcome.  So whether a Lagos doctor recycles or disposes of his computer, it is the same?  When I recycle rather than dispose, I am a good person.  Whether the person in the developing world recycles or disposes is NOT the same outcome.  Recycling is NOT disposal.  And this brings us back to the Slumdog Millionaires, the informal scrap sector we opened with.  While they are not as educated as the Tech Sector which arranges to purchase and import used electronics, they are not shameful or "primitive".  I've said many times, white boy scouts and girl scouts earn medals for recycling, it beats the heck out of mining jobs in Africa, or worse places orphans and drop-outs could wind up.

Fair trade advocates, like WR3A members, care which outcome, repair or recycling or disposal, is going to happen.  It matters a lot.  I look forward to the receipt reports and reconciliations of the 300,000 Steward "tested working" units, to compare them with the outcome of the 300,000 units WR3A has managed export of during the past 3 years. Saying a "black person" or "Asian" winds up with the second hand goods is not an "outcome".

The entire debate begs the questions:  Can poor people recycle?

This is surreal.  Good God!  If recycling is disposal, and a part removed during repair is recycled, therefore repair is equal to disposal?  The only possible explanation for BAN's insistence on this standard is financial.  Start watching the organizations IRS Form 990, there is something fishy going on here, and it probably involves Planned Obsolescence or Big Shred.

Going back to the introduction of this post, I've been promoting recycling since high school in the 1970s.   I studied international relations, and went into Peace Corps in the 1980s.  The very best outcome God and the Free Market provide, to reward the best and brightest geeks in the poorest countries, is at risk if reuse equals disposal, and the explicit right-to-repair clauses of the Basel Convention are forgotten.


Compromise is overdue.  Our e-waste recycling industry has a mandate to address the environmental concerns which have been raised.   There is more at stake than pollution or affordable electronics recycling.  When good things happen naturally in a free market, it is vital that whatever market corrections we need to implement do not hamper or retard the Good.

It is time to find middle ground between the Perfect and the Good.