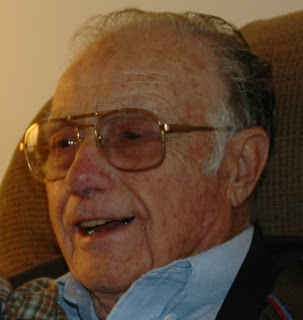 He told about how he and his brother were out hunting skunk pelts, and they saw a skunk run up and under this big old rock ledge. The ledge was too low to the ground for them to see under or crawl under. So Pa told how they used their pocket knifes to cut a tree sapling, and to split the end in two. Then they could probe up and under the ledge until they felt something soft, then real quick they twisted the sapling so the skunk's fur would get all entwined in it. They pulled out the skunk and bopped him on the head, getting a pretty good spray in the bargain.
They figured there might be some more skunks under that same ledge, and went to poking around some more and sure enough, felt something soft. They twisted the fur up in the sapling and dragged the critter out.
A few hours later they were delighted to have took seven skunks, for meat and fur and hide, and they headed home to tell their ma. 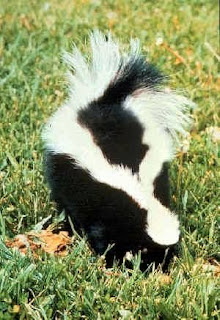 Of course they were not allowed into the house, they smelled so bad, and it was too late to bathe, so they went out and slept in the barn. The next morning they'd bring the pelts in to the school teacher, Mr. Rey, who was paying kids for pelts as a way to augment his teacher salary.
Pa told how when they got to the one-room Taney County schoolhouse (near Forsyth or Walnut Shade, not sure), that they smelled just awful, but Mr. Rey was pleased with seven pelts. So they sat in class.
The rest of the kids in class spent the day leaning out the window, gulping fresh air.  Pa chuckled about how he and his brother were just boys, and the whole time felt nothing but pride and happiness that whole day, on account of the money they'd made from old Mr. Rey.  So the teacher was happy and the boys were happy.   It makes you appreciate what some people have to go through to earn a living.
The reason I write this is that I was listening to Pandora Radio this Memorial Day weekend, and my favorite station is based on Kentucky Colonels (bluegrass), and the Stanley Brothers just came on signing "rabbit in a log and I ain't got my dog". I have heard this song dozens of times but I guess I never heard the lyrics well enough to realize the singer is teaching the same trick, sticking briar up in the log to turn around and twist the rabbit's fur.

(My buddies from Carleton College may note that Clarence White of the Kentucky Colonels bluegrass band later joined the Byrds on the album I played too loudly on fourth Goodhue.  My son Morgan's middle name is Clarence, his great-grandpa's namesake).
And just before you think I up and forgot to write about "e-waste" recycling and exports and electronics recycling policy, consider this. I am seven generations of hillbilly.  My parents did not have electricity or phones or televisions until they were teens (actually, my wife did not have a telephone or color TV until she was a teen), and could no more imagine I'd make a career out of recycling "ewaste" than that I'd be trading in it with Indonesians, Peruvians, Mexicans and Egyptians. But here I am today, a supposed national expert on proper management of cathode ray tube glass, printed circuit boards, etc., and I am just a generation or two out of the woods. But one of the reasons I'm told we shouldn't provide computers and monitor displays to Africans and Latin Americans and southeast Asians is that they don't have the skill or technology to properly recycle.
That's bull-hockey. What they lack is the financial incentive to properly recycle. You give them that and they will do a better job than anybody. And the people in Asia, Africa, and Latin America who know more about recycling than I do have already been born and are probably already in business, and they will be as far away from the wire burning villages of their grandparents as I am from skunk hunting in the Vermont woods.
The USA was added to the OECD in 1961;  Mexico in 1994, Korea 1996.  There has been a freeze on adding countries during the past decade, even though countries like Singapore and Malaysia have far passed what Mexico, Korea and the USA had for environmental agencies when they were admitted.  The Basel Convention hitched its horse to OECD, and OECD fell asleep.
There are places in China which look like the photos at BAN.org.  And there are people dressed like hillbillies at Silver Dollar City in Branson.  And don't start me on comparing Doe Run (the CRT glass end market in Missouri) to Samsung Corning in Malaysia.
Here's to Grandpa Fisher this Memorial Day 2010.  His wife, grandma Lauradean Youngblood Fisher, is still with us, time to give her a call.
rest of the lyrics...
I'll build me a fire and I'll roast that old hare Roll him in the flames to make him brown And I'll feast here tonight while the moon's shining bright Just find me a place to lie down To lie down, to lie down Find me a place to lie down I'll feast here tonight while the moon's shining bright Just find me a place to lie down I'm going down the track with a chicken on my back The soles on my shoes nearly gone Just a little ways ahead there's an old framer's shed That's where I'll rest my weary bones Weart bones, weary bones That's where I'll rest my weary bones Just a little ways ahead there's an old farmer's shed That's where I'll rest my weary bones