Ford Motor Company, as I remember, came up with a brilliant response to Vance Packard's accusation, in "the Waste Makers", that USA industry was producing stuff, marketing new stuff, not supporting or repairing the current stuff, and practicing what he coined as "planned obsolescence".

Ford's response was that Americans learn to drive when they are teenagers, and teens cannot afford new cars.  The earlier a person learns to drive, the more cars one will own (buy) during one's lifetime.  The first brand of car one learns to drive is much more likely to reappear in subsequent purchases.  Therefore, Ford supported car repair and used car sales.

Does the Ford response to Vance Packard apply to electronics repair and reuse?  With the Fuji vs. Jazz camera case (Supreme Court says that repair and refurbishment is too legal) we clearly see that there is a limit to what manufacturers will support in the secondary market (and in that case, apparently no limit to which some OEMs will go to oppose 'market cannibalization' by refurbished sales).  Don't even start talking about software, the industry has succeeded in changing to a "subscription" model where we cannot seem to own software at all.   Perhaps Ford and the motor car industry of the 1960s was protected by a limited number of brands and high threshold of entry into the manufacturing field.   In an age where brands are glued onto a device by a contract manufacturer in China, making several different brands on different shifts, and an age where "white box" computers, generic foods, and "good enough" markets command scale of manufacturing, Ford's counterpoint itself may seem obsolete.

Still, for computer display devices (CRTs), I think fear of the secondary market and predisposition to "obsolescence in hindsight", via "extended producer responsibility" systems, can be negotiated in the same sophisticated manner that Ford responded to Vance Packard.   If the OEMs learn to "punt the ball", send the used equipment deep enough into the market (e.g., Burkina Faso) where they realistically are not losing any significant market share, and where they have an interest in people "learning to drive" on OEM secondary market products, then the OEMs will benefit by growing the market while retaining the added value from reuse.

Whether or not OEMs succeed in supporting the secondary market, or euthanizing products they take back, will be far more important than "convenience" and "logistics".   A pair of used tennis shoes sold to an African teenager for $1 per pair is 100 times more valuable than the same pair of sneakers ground up into a penny's worth of crumb rubber.  That is not about greed.   The additional value recognized by the African student is value embodied in the 'value added' of the shoes.   The energy, the carbon, the labor, all have a higher value to the poor African kid, who may have to work 3 days in the hot sun for the dollar he pays for the used Nikes.

He does not realistically represent a lost sale of $95 shoes at the Galleria shopping mall.  But the shoe manufacturer, in taking back the shoes, has an awesome responsibility.  If they take back 100 pairs of shoes, and 95% are sold for a dollar a pair in Africa, the company is up by $95.  But if even one pair of the shoes does get resold in the USA and displaces a Nike sale at the mall, the 95 African students are now a drag on profits.  Since wealthy kids feet grow quickly, there are a lot of "gently used" childrens shoes on in the secondary stream.  If two pairs of shoes are resold at the expense of two new pairs of Nikes, the secondary market is a threat to profits.

Here are a couple of videos produced by Nike in support of their "reuse" a shoe program.

Not to put too fine a point on it, this makes me wanna vomit.  The money National Recycling Coalition accepted from Nike inflicted fatal damage on NRC's credibility in my book.  The shredders are about "planned obsolescence in hindsight".  (And they call it "reuse"!?!  Next they'll be selling "kosher pork chops".)

If Nike was truly interested in making crumb rubber and "the Earth's future", it would simply buy the used shoes at market value from the Salvation Army, in competition with African students.  Instead, Nike is setting up "reuse a shoe" programs upstream of Goodwill and Salvation Army, in a much more expensive system than buying them from the charities.  And they wouldn't need to produce expensive greenwashing videos like this one.  Shoes sent to Salvation Army do not wind up in a landfill, and my blood boils to see young environmentalists hijacked into supporting competition against Salvation Army, Goodwill, and Africa.


So, this is my fear of "product stewardship".  I am not against it per se, any more than I am in favor of government-run recycling systems, per se.  I am interested in competition.  If there is legitimate fear of competition, there is respect.  If Nike respects Goodwill and Salvation Army, they will figure out a way to employ the Ford strategy, by paying an incremental difference to get the two pairs of shoes in question into Africa, deep Africa, where they shoes will be worn down to a nub, and some kid who likes them may aspire to one day buy a newer pair of Nikes.   When Africa is allowed to refurbish and assemble, the path Southeast Asia took to growth in incomes, the kids today will remember their first pair of Nikes and be a new market.

If I seem overly negative about "product stewardship", it is in reaction to the a priori, dogmatic, zealotry which gives fuel to a program like this Nike program, which takes away revenue from USA homeless shelters and takes away shoes from barefoot Africans and advertises itself as environmental responsibility.   It is disgusting, and if Product Stewardship advocates want the good potential of their programs to succeed, they will see that like government run programs, original manufacturer programs are a sharp knife that cuts more than one direction.

Government-managed systems are neither inherently good or bad, except insofar that they curtail competition.  Producer responsibility systems, or "product stewardship", is neither good nor bad except insofar as it curtails competition.  Less competition for value and ideas leads to unintended environmental consequences.  As a government employee at Massachusetts DEP I was told by an executive agency official that my state office management of the Springfield MRF would, logically and necessarily, result in an outcome less attractive to taxpayers.  I stand on my track record managing that facility.  But that does not mean I assume that if the same government management of similar facilities nationwide were the norm that recycling would operate more efficiently... I'm pretty sure of the opposite outcome.  But one government MRF managed by one competent state official will just as likely do as well as average. 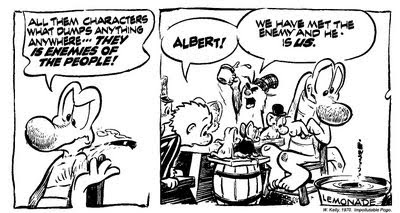 Whether the Ford logic still applies in the "good enough market", where generic products and white-box, counterfeiting, and contract assembly are the path to development in the 3B3K nations, is the question of our time.   I am shocked to find respected organizations like NRDC and Grist not asking the question.  As Walt Kelley's Pogo characters said (reprinted in the 1971 Earth Day poster):