I'm Proud to be an Exporter

Why do good E-Scrap Recycling companies refuse to export used computer monitors for reuse to an audited, ISO9000, ISO14001, permitted factory, with glass-to-glass markets for incidental breakage?  Why is contract manufacturing acceptable when we buy an IPad or LCD or CRT screen, but not acceptable for take-back of the same item they made? 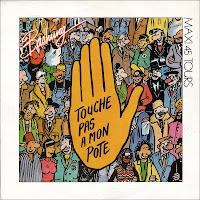 Why do so many e-recycling companies grind up monitors which people want and need and will pay for?  Who came up with the stupid "No Intact Unit" export policy?  Why shred working equipment before it can be exported?  Why do they practice what Tom Friedman calls "down-cycling" (removing added value and carbon and material investment) in Flat Hot and Crowded?

Colt Recycling, Creative Recycling, ECO International, Electronics Recyclers International, Total Reclaim, URT, and WeRecycle...  Great companies.  Unfortunately, they won't export CRTs, even to perfectly capable and legal monitor re-manufacturing facilities.  We have been turned down in recent years for all of our WR3A purchase orders, because they have a "no intact unit" policy.

They say it is because BAN.org does not allow the export.  BAN says that those companies are testing the monitors and sending all the good ones for reuse, but in a recent call to EPEAT Sarah Westervelt said that many countries don't feel they need CRTs at all.  BAN threatens companies (like Dell and Apple) with a boycott if they don't practice BAN's rules against exporting, rules which are so vague (must be "working" but cannot be sold to factories which purchase "working"?) that it's easier just to shred them.  BAN does nothing to intervene when states like California, in SB20, write detailed specifications for how to ruin a working monitor prior to export ("release vacuum seal in the cathode ray gun"), even when told that state officials cite BAN as the source of the rule.

Meanwhile, technicians overseas would much, much rather be working on the kinds of nice equipment rich countries throw away, which to them are worthy of upgrade and repair.

It's a dysfunctional mess, a mis-interpretation of the clearly worded "export for repair and refurbishment" section of Annex IX of the Basel Convention.   They all know that the contract manufacturing industry marches on, filling the gap by buying monitors from lowball recyclers.  They know that the price of the CRTs, at $7 CIF (the price at the import dock) is far higher than copper and plastic an explain.

The basic problem is that they are
ashamed of the label "exporter".

I am a Fair Trade Exporter, and I'm proud.

I'm proud of my friends in Africa, Asia, Latin America who buy working and used equipment and upgrade it and make it better than it was.  They create newer products which their friends can afford, and in the process, they are creating a recycling infrastructure in the very countries which BAN says no infrastructure exists.

Let's all stand up and say "YES" to Green Recycling Exports.

I am proud that my company removes the junk and recycles obsolete e-scrap here in the USA.  But I don't feel superior to the partners overseas.  I know they can and will, one day, do as good a job as we do. 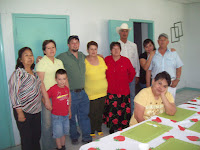 Who are our Fair Trade Friends at Good Point Recycling?  Really, there are too many to name.  Factories we work with and have visited employ hundreds of people in technology and recycling jobs.

I'm proud of women in the developing world who set up their own companies to clean up the environment and bridge the digital divide. 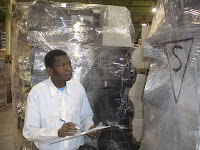 I'm proud of Frederic Fahiri Somda, the attorney from Burkina Faso who spent months in Vermont studying the Basel Convention and studying demanufacturing to identify recycling practices which were simple and legal.  I am proud to know a man who's life was so much harder than anyone I have ever met, and who through God's faith rose so high above it, and yet was so willing to work side-by-side with direct labor, to learn English, and to study the Basel Convention as it relates to Burkina Faso commodity imports. 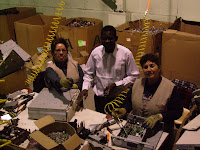 I'm proud of Dolores and Lidia, the first two women from Fronteras Mexico to brave the snow and train in recycling demanufacturing.  They worked beside Mr. Somda in training for the opening of Retroworks de Mexico, and they shared their first deep snow experiences together with our Middlebury staff.  From past posts, you all know how proud I am of all the women in Fronteras, Mexico, who through sheer prayer are carrying the recycling plant through the maze of commerce customs, EPA customs, local politics, corrupt gangsters, and sexist culture. 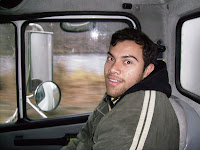 I'm proud of Ow Young Su Fung and Allen Liu, and all their staff in Penang Malaysia, who taught me more about CRT monitors than anyone in the USA.  I'm proud of their efforts to win ISO9000 and 14000, and very proud that the recycling of accidental breakage and fallout CRTs we negotiated in 2007 is now the northern Malaysia CRT recycling program.

I'm proud of Mariano Huchim, the young computer tech from Nogales, Mexico, who we recruited from a church program.  I'm proud how he learns everything we ask him to, including truck driving across the border, which puts him daily in the confusion of Arizona's "illegal immigrant" laws as he picks up material from Douglas and drives it across the border.  When we have funds, he'll be flying to Indonesia to cross train at a CRT refurbishing factory there.  I am proud that he lived in my house and played soccor with my kids, and my kids all want to learn Spanish in school following his trip here with Pancho. 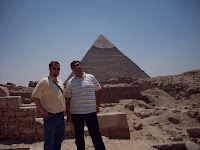 I'm proud of Hamdy Moussa and his 20 Egyptian staff who repair and resell and support computers.  I was proud of the long line of Egyptian college students, nurses, and interns who line up in his shop to buy the computer monitors he repaired and supported... until Egyptian customs seized 3 of our containerloads in 2008 and declared them "e-waste".  (Hey BAN, want to issue a press release that I exported Pentium 4s and working monitors?  They were seized by customs, go to town man!  I'm a criminal!) 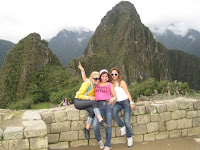 I'm proud of Jinex in Peru, who has a women-owned business buying and repairing used NTSC televisions from hotel takeouts and WR3A Fair Trade recyclers in the USA, repairing and selling them in Lima Peru.  (Hey BAN, the Peru customs held one of our containers for 3 months because the number of the count - 305 - did not match the bill of lading - 301.  Issue a press release!) 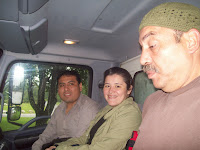 I'm proud of Tito Santiago, the Middlebury High School counselor who lived with me for a year and translated for, and cooked for, all the Mexican and Peruvian techs who came for training or load inspections, and how he could translate between them and the local kids from Vermont who had to sort and test the stuff for their POs. 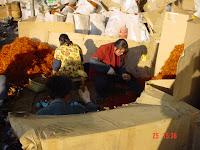 I'm proud of the women in China who carefully grade highest-grade electronic quality copper apart from pipe grade and other copper so that it does not have to be re-refined (a carbon and pollution cost savings far greater than the plastic the skins disposed of from the wire).  I'm proud that they are not burning them at this scrap yard, but removing it by hand.

I am proud of Jonas and Jouzas, the Lithuanians who worked for 6 months in Middlebury Vermont to learn how to set up an "e-scrap" factory in Vilnius, which planned to use the CRT glass demand at Ekranas and the scrap yards of the local smelters to manage scrap under their new EU member status.


I'm proud of Souleymane of Dakar Senegal, who hand tested each PC he bought from Middlebury, and taught our staff which Pentium 3s we had been scrapping were still in demand there, and the conditions they needed to be in for him to use them.  I'm proud of the project we did with Souley and his wife, filming the loads and explaining the used computer trade.  I'm proud of how he could translate Spanish when he stayed at my house, and tell Don Chucko and Vicki and the other Chicas how what they were sorting meant for his people in Africa.

I'm proud of Ting in China, who flew to Vermont to show me which monitors her SKD factory was buying, and who set up visits for me to tour the factory to see how my shipments were being handled.  I no longer sell her working monitors because the Chinese government bans even working P4 laptops, all used goods.  (But I was selling to her before I knew that!  So come after me BAN-man, shut me down!) 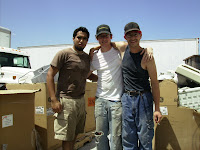 I'm proud to see interns like Oscar from Mexico working beside interns like Seth from Middlebury College and summer employees like Mark from Hinesburg Vermont, to sort junk from loads and separate monitors for the order from Hamdy in Cairo, Allen in Malaysia, and Jinex from Peru.  I am proud how many local Vermonters go home with a story to tell about a person they met from another culture.  I'm proud of the town-gown side of our program in Middlebury. 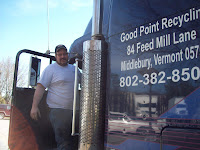 I'm proud of Chris Landen, a local Vermont truck repairman who volunteered to drive our Good Point tractor to Mexico for Las Chicas Bravas to use.  He arrived when news of the Mexico "swine flu" scare was breaking, another example of how the press can blow a problem out of all proportion.  Despite several breakdowns, he got the truck to a good home in Douglas Arizona, and we flew him back to Middlebury with an adventure to tell.


I grew up down south, and I've been called "n**ger lover" before.  Maybe that has given me a channel to Huck Finn, who was brave enough to say "all right then, I'll go to hell" rather than betray his runaway slave friend Jim.

There is pride I am guilty of, and pride I a proud of.  This is not about me.  This is about getting all of us to stand up for the export partners we are proud of, and to tell a different story than BAN is telling suffering and incompetence.  BAN is willing to report people they know nothing about, like Semarang Indonesia.  I hope to hear from more proud exporters coming out of the closet.

I've been in the industry for over 7 years and have been fortunate to see several different types of e-waste recycling and reuse. I think what you are doing is amazing and I commend you on a job well done. If there were more people like you that actually cared about education and reuse in other countries, BAN's export rule wouldn't be needed. But because there are so many "bad" recyclers out there just trying to make a buck, the need for some type of legislation and action is warranted. I think the industry has come a long way but still has a ways to go. Either way, well done! Btw, I'm from the south too and believe me, if BAN were to pay half as much attention to the dumping in landfills down here, they'd have a huge job cut out for them.

Having lived and worked in Bangladesh for 20 years I've seen gurus of re-cycling at work! Although born of necessity it's inspiring to be around such innovation and like you I'm proud to count many of these unsung heroes among my friends.

Keep up your good work!