Thanks to a comment from a reader yesterday, I'd like to remind everyone that I was on the front lines in 2002 in the fight against "Toxics Along for the Ride" or TAR.  I traveled to China on my own expense to figure out how these wastes (something no one wants) got there.  Who paid for the transport?  I also recommended to Jim Puckett that BAN visited Africa, because there is so much less capacity to deal with residue - non repairable really does wind up directly as waste. 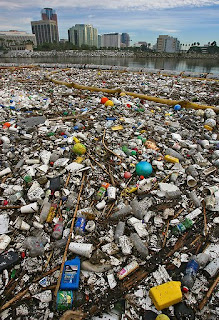 We definitely found that strong demand for raw materials and repairable units will cause importers to turn a blind eye ("close one eye") on TAR.

But no one will accept "80% TAR" unless there is a bar of gold or a Harley Davidson motorcycle or a Mercedes Benz under the e-scrap.  For the millions of containers which travel the oceans, to be repeatable the transaction must be economical.

The 20%-40% waste (TAR) which shows up on foreign shores is a definite problem which needs a solution.  By rebutting BAN, I don't say otherwise.  I just don't think you create fair trade by taking the best and most ethical suppliers out of the reuse business - in fact, that creates a vacuum which makes the TAR problem worse.

BAN's solution is, in practice, prohibition.  And to see how prohibition works, check out "Last Call" by Daniel Okrent, which provides the details leading up to, and exiting from, our nation's experiment with a constitutional amendment against serving drinks with alcohol.

Just as the folks who spoke against Prohibition were not all in favor of drunkenness, I am speaking in favor of exports of used electronics without defending the many people who ship "toxics along for the ride".

You want to take good people out of the illegal equation.  It's natural.  But it's better to allow Good People to reform the trade than to withdraw their supply from the marketplace.

But the point of this post is not to excuse people who "take a dump" on the export market.  Too many USA recyclers accumulated material that no one wants, and rather than deal with it responsibly, they mix it into a sea container and send it overseas. If the USA turns a blind eye on "toxics along for the ride", the reaction by organizations like BAN will continue.  BAN means well and in fact accomplishes reform.  But the Basel Convention does not say "tested working" or "fully functional", it says "repair and refurbishment".  So the R2 Standard is closer to international law than "the Pledge."
Posted by Robin at 4:39 AM