My wife and I have a nice Gaggia Espresso Dose expresso machine. The gasket or o-ring wore out after a year and a half. All I could find from my online searches were questions from other people with similar problems. There was a Fixya site which was helpful, and a ship-to-and-repair site in Seattle or somewhere NW.

Then I found this site: Parts Guru

What does PartsGuru.com have to do with E-waste? Well, visit the site. They have more than one site, and one is in Lansdale, PA, but the Vishnu character and the European, Indian, and Chinese parts available say this is a world business. The owner or founder's face is on the home page.

This is exactly what I saw in Cameroon, in Malaysia, in China, and even in Lithuania. It exists in Europe and the USA too, but almost all of those businesses (and cell phone repair shops, too) are run by immigrants.

Finding, buying, selling, trading... new and used parts. Taking stuff apart and keeping pieces in inventory. It's an incredible entrepreneurial path to wealth and development. And the "Big Secret Factories" and "Partsguru.com" show that repair and refurbishment can be scalable.

The scalability of the gray market is alarming to many OEMs. It used to be that if there was someone who could take apart and put back together your machine blindfolded, that he was a niche player, confined to some place by geography, and obsolescence kept repair and maintenance from being a threat. Japan is probably the first nation to industrialize based on refurbishing and knock-offs, but I'm not sure about that.

But I saw this in Africa. Someone dirt poor, with time on their hands, would buy a scrap bike or moped and take all the parts and inventory them and start to build a store based on a mini-chop-shop economy. This economy exists in the USA for automobiles and airplanes, and actually I'm quite impressed by the laptop parts market on ebay. Outside of the USA, it exists for typewriters and coffee machines. 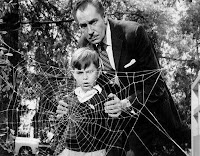 A friend at Fayetteville High School in Arkansas, I think it was Michael Rudko, once said that the universal human condition was summed up in the final scene of Vincent Price's movie, The Fly. The final image, they find the tiny fly with the human head and arms caught in a spider web (trust me, it was a cult movie, I'm only 47) crying "HELP ME! Heeellllpppp mmeeee!" They sell model kits of the little dude in the spider web. The disbelieving detective has the human universal response... you can almost hear his gears ticking... "Don't understand. Must smash with rock." Rather than save the specimen of the tiny human-fly for science, he picks up a rock or a brick and smashes it.

That is what the states with Product Stewardship laws seem to be doing with "ewaste", a characterization of the parts and repair and recyclin and waste market so broad in definition that it really does somewhat defy regulation. At MA DEP, we tried to write regulations and run the grants in a way which preserved the value of the Goodwill Industries and Salvation Army and TV and appliance repair markets. Two of the parts/repair people, Peter Kopchyk and Dick Peloquin, went on to establish huge ewaste companies. Goodwill Industries now has 450 takeback sites, I modestly claim started with some seeds from the MA program which I told Pat Nathan of Dell about in Austin Texas, as a consultant back in 2001 or 2002. 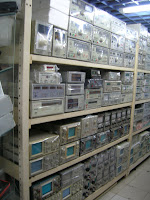 Put it all in a pile, call it ewaste, and kill it. It is much harder to develop a Dick Peloquin or Hamdy Moussa or Ow Young Su Fung than it is to buy a shredder. But when I was consulting for the Chinese Guangdong Electric Appliance Institute and Guangdong EPA in 2002, I asked whether Ms Huang Wenxi whether the Chinese Communist Party, in developing deals with OEMs for manufacturing plants, would try to destroy the little repair people (while near an entire city block of double decker shops which all sold oscilloscopes and TV repair equipment - not repaired TVs, store after store that sold equipment to TV repairmen).

She understood the question, and did not want to be political. But she said in her opinion, it would be impossible. There are too many repair people and the secondary economy was too big. Even if they tried, she thought the repair and reuse market was too big to control.

That's kind of our theory of how democracy spreads, and how internet access creates freedom of the press, right?