4) Meanwhile, WR3A had interviewed dozens of Africa CRT repairpeople, including Master Technician Baba, now in his 70s, who had trained a great many of them. We documented that the piles of 1970s and 1980s TVs in piles around their shops were definitely not, not ever, "recently imported just days earlier" as Jim Puckett of BAN infamously claimed and continues to promote. We performed a great deal of secondary research from IMF and World Bank electric grid loans in the 1990s and 2000s, which tended to include surveys of how many appliances were owned in the cities like Accra which needed financing for new hydroelectric dams. We added research from Dr. Graham Mytton of BBC Africa, who personally worked on hundreds of TV and radio station construction in Africa from 1960s to 2000s.

5) Unable to replace the Camacho buy-back offer at a reasonable cost, we turned our attention to a new problem that was rising in the world press - plastic pollution in the ocean. The attempts to control ocean plastic by banning plastic straws (see blog "Grasping At Straws") was well-intentioned but poorly aimed or thought out.  MOST OCEAN PLASTIC COMES FROM STORMWATER RUNOFF IN RAPIDLY EMERGING CITIES ON THE COASTS, PARTICULARLY IN COUNTRIES WITH MONSOON/WET SEASONS.

6) WR3A dba Fair Trade Recycling connected (online communication) with WasteAid.org. We have found that thanks to their boots on the ground work in Africa, WasteAid recently been helping us distinguish, for the world press, between Valedictorian #TechSector and PrimarySchoolDropout #ScrapSector in Africa. They also embraced what WR3A embraces - that even the Scrappers are not "primitive" and in fact represent huge potential to manage waste in these cities, if they are given a bit of a hand.

7) Fair Trade Recycling therefore decided to open the Fair Trade Recycling Offset tonnage to plastic waste and litter, not just CRTs. A TechSector importer seeking to purchase used electronics from a USA or EU seller may prove they collected (and preferably recycled, but getting it out of the rain gutters is job 1) ton-for-ton as much waste as they imported for reuse.

8) WR3A/FTR then met with Susan Cascino (City of Boston) by conference call to seed the idea that USA cities that have long hit a ceiling with their own recycling diversion rates might partner with electronics recyclers - perhaps their own Surplus Property - to engage the Waste Offsets and take credit (with an asterisk or other shaded graph) for reducing ocean plastic, not via regulation of bags and straws, but by employing / engaging with WasteAid and WR3A and others to reduce ocean plastic pollution at its primary source.

9) We are finding that Ghana's Scrap Sector already employs thousands of plastic recyclers, operating without subsidy. Here in the northern City of Tamale, you find scrap metal properly sorted (above right) and rigid and other plastics graded by color and type. Africa and Asia and Latin America already have the people in place. Like dolphins, they just need a hand*. 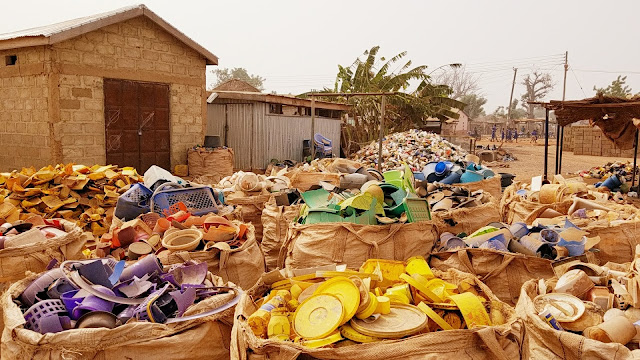 I'm like the worst fundraiser. I really get excited by the potential of our ideas, but am snakebit when it comes to raising money. But by blogging honestly, I hope to keep meeting really interesting and smart people, professors and technicians and regulators and documentary filmmakers and authors, who perhaps somehow together can find a way to fund this. It's way easier to stop the waste in the river in the Emerging Markets cities than it is to coral it in the great garbage patch in the ocean.  Imagine Faulkner's Abner Snopes had a million dollar idea, and see me in the mirror. I suck at everything except understanding things better than some other people, thanks to my background, exposure, and Socratic method.


*Dolphins needing a hand was from a high school poem written by Marc Reif, now a teacher at my alma mater, Fayetteville High School. He was a junior, I was a senior, Milton Burke was our Creative Writing teacher. Milton now lives in the Himalayas of Nepal building schools in his retirement.