[Middlebury, Vermont May 22, 2017]  Fair Trade Recycling has launched a strategic partnership in West Africa to create capacity for proper recycling of junk "e-waste" devices without impugning, racially profiling, or interfering with the imports of Africa's talented "Tech Sector".

The initiative is based on "carbon offset" models, and is derived from conclusions Fair Trade Recycling representatives arrived at during research in Ghana from 2015 to the present.

Under the new program, African Tech Sector buyers will be rewarded with lower prices for used computers and tech sector equipment they import when they "offset" or "exchange" the tonnage for a similar quantity of obsolete or irreparable electronics taken back from African cities.  The model is patterned after "carbon offset" or carbon exchange models and the recycling training program for the women's collective "Retroworks de Mexico".

For every 50 containerloads of used electronics imported by Ghana's Tech Sector, the reuse shops will take back 10 containerloads of junk TVs and computers which were imported to Ghana two or three decades ago.  And the Tech Sector will pay for proper tools, training and methods - all funded by the profitable and appropriate reuse of newer second-hand products.

The "Agenda Shift" has already resulted in calls from major manufacturers interested in promoting takeback in Africa as a solution to junk buildup.


In January and February, WR3A members sponsored a trial run of the project.  Three oft-photographed scrappers from the wire burning area of Agbogbloshie were paid and provided room and board by a Tamale-based importer, Wahab Odoi Muhammed (Chendiba Enterprises).  They met with more than a dozen technicians.  Odoi's group paid the scrappers to remove plastic cases by hand (not burning), washing their hands and cleaning up as they went.  The copper recovered was then brought to a local metalsmith to produce "Fair Trade Recycling Jewelry".

The work was documented by three reporters from Spain and the USA (the bracelets were given to a Spanish documentary team). 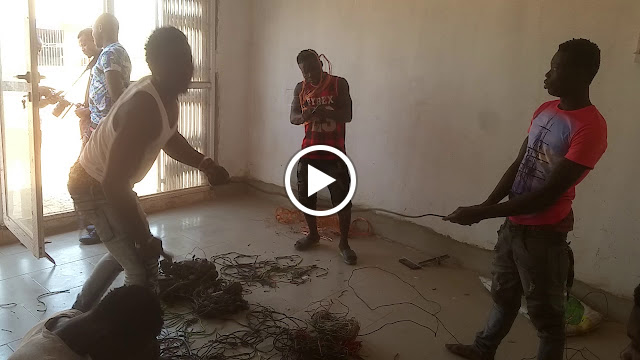 1) Secondary Research and Baseline Data:  Africa had 250 television stations in 1977.  Most homes in cities like Accra owned a TV or computer two decades ago. Junk electronics filmed at Agbogbloshie didn't arrive recently by sea container, they are brought by pushcart from "carters" collecting from city neighborhoods.

2) Investigation of Photographic Evidence:  Most abandoned TVs seen at Ghana TV repair shops are clearly older models imported decades earlier.  Techs interviewed at the repair shops indicated that Africans keep older equipment they purchased decades ago, hoping it has value, but usually refuse to pay the cost of repair, or opt to "trade in" the TV for a more recent reuse-import.  (Ingenthron notes the same dynamic was documented in a Massachusetts DEP and EPA funded study in the late 1990s).

3) Credit for Ingenuity:  The "teledensity" (mobile phone, internet, broadcast) in Africa has grown enormously, and can only be explained by a very high percentage of reuse.  The "critical mass of users" that make possible the investments into data pipelines and towers was provided by Africans who learned to add and preserve value in devices discarded by Westerners  - and Asian Tiger economies.

4) Hand Disassembly isn't Shameful:  The portrayal of Africans in the scrap sector as "children" and "orphans", and descriptions of their processes as "primitive" and "ghoulish", or their neighborhoods as "Sodom and Gomorrah" are based on a combination of racial and religious stereotypes, often promoted by land development professionals seeking to evict scrappers.  Agbogbloshie is close to the center of Accra, and has been subject of evictions and alleged "land grab" lawsuits for many decades.  Meanwhile, other than burning tires and wire, no chemical or polluting processes were observed. 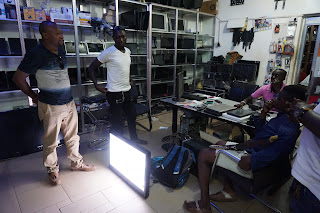 5) Africa's Tech Sector Represents the Finest Opportunity:  Tech Sector workers interviewed should be identified as the best and brightest in Africa.  The "geeks of color" create jobs, reduce waste, create affordable phone, internet, and broadcast opportunities.  In each and every case of imports, an African Tech Sector businessperson, or his compatriot in Europe, USA, Japan, etc., was in charge of the import from loading to shipping to customs clearance to distribution.  The reports that "fat cat sham Recyclers" in the USA are ordering and filling containers funded by "externalized costs" is perhaps explained more by colonialist assumptions about Africans than by objective data.

The "carbon trading model" should have been obvious, Ingenthron notes.  "You can't squeeze more accountability out of a laptop repairman any more than you can squeeze more carbon out of a tans-Atlantic flight.  These are good guys, and it's much easier for them to measure recycling of goods produced by their cities than it is to second-guess their choices of what to import."

Fair Trade Recycling's upcoming report shows that the volumes collected at sites like Agbogbloshie could never have been explained by "percentage of breakage and fallout and unrepairable imports".  While imports aren't perfect, even brand new appliances, or bags of corn and rice, suffer spoilage and breakage.  The important fact is that Africans pay for the goods, pay for the transport, pay for the customs duties, and had no economic interest in importing junk.

"WR3A's model ten years ago (which was adapted in part by E-Stewards and R2 initiatives) was to ensure that only the best USA and EU recyclers export to emerging markets, and ship only the best material," said Robin Ingenthron, founder of Fair Trade Recycling.

"What emerged were various 'Pledges' and 'test criteria' and claims-based trades which are difficult to verify and leave both importers and exporters exposed to claims of 'dumping' by competitors in both new product sales (planned obsolescence) and automated shredding industries."

Over the course of multiple site visits, both to scrapyards like Agbogbloshie and Tech Sector repair shops in Accra, Kumasi and Tamale, it was found to be impractical to actually track the "shelf life" of products imported.  Now a new model has emerged which, Ingenthron claims, will revolutionize the way secondhand electronics are reported on.

"After my first visit to Agbogbloshie, it was clear that the timeline was misinterpreted.  Yes, Ghana was importing 400-500 sea containers per month of second hand goods (some destined for Burkina Faso, Mali, Togo, etc).  But no one has observed even a single containerload brought to or dumped at Agbogbloshie."

In June, Fair Trade Recycling is sending two student ambassadors, one from University of Florida and one from Middlebury College, on a 7 week apprenticeship under Ghana Tech Sector businesses.  Ingenthron hopes that "urban eco-tourism" will provide benefits to Africa's maligned Tech Sector, and a model to pay back Africans for the decade of "exotic photojournalism" they've been subjected to.

One of the many reasons I am proud to be a part of Good Point Recycling. Making a difference.