Dear Directors, Producers, and Stars of the Music Video "Life Is What You Make It",

About two weeks ago, I ran across the release of your new Placebo music video through my organization, Fair Trade Recycling / WR3A, which researches public posts on Agbogbloshie.  Despite recognizing some of Placebo's hits from the past two decades, I admit I was not at all acquainted with the artists.  Over the course of 2 weeks, I've developed a much greater appreciation for not just the art, but the social justice that Brian and others with the band strive for.

I know a lot more about African recycling than I know about music.  I've been to Abgogbloshie and Old Fadama several times with our members from Tamale, Ghana.  We have translated for or been interviewed by several documentary and print journalism investigations on so-called e-waste dumping in Africa.  Here are 4 good articles and films on the topic of export.

But let me explain how we can work together to create clean and sustainable recycling jobs for the "workers of Agbogbloshie".  There's a win-win here, and there are plenty of other people besides me you can go through if I've tarnished the relationship by introducing the subject.  ("Alright then, I'll go to hell," often starts here).

Recently, Sasha Rainbow was promoting clips of my friend, Muhammed Awal Basit, in a NY Yankees shirt and pink girl's bicycle helmet, throwing some kind of gasoline-soaked wirey carcass, aflame overhead, in the empty space in the northwest bank of the Korle Lagoon. 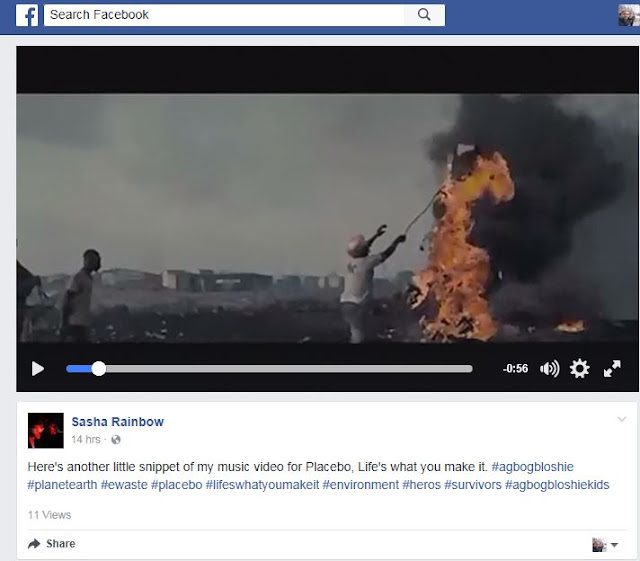 Awal is someone I met more than two years ago, but we have stayed in contact, along with his (slum) mates Razak and Yahroo.  We were introduced to them in 2015 when I traveled several times to the scrapyard with native Dagbani speakers from Chendiba Enterprises of Tamale.

African owned Chendiba represents the best and brightest tech sector jobs in Africa - they import surplus property and used computer equipment which they inspect prior to export, being in the same line of business as Joseph "Hurricane" Benson.  Benson is a Nigerian expat TV repairman living in Essex, UK, who was accused 5 years ago (unjustly) of exporting containerloads of used equipment described variously as 50%, 75%, 80%, or 90% waste destined for "primitive recycling", allegedly dumped at Agbogbloshie in sea containers.

We expressed our concern that your video promotes a false narrative that threatens our friends in the Africa Tech Sector.  We asked questions about compensation and credits to the actors. The comment left on the Independent, but typical of what I've said in public places.

It's a bummer to have produced an exciting new video, and then to have an unknown blogger show up and criticize it to fans.  And twitter forces us to boil it down to 140 char.

So - I'm now writing about Sasha Rainbow's public description of our organization and me personally, which was shared with me indirectly.

So the questions are merely seen as something "to cause trouble".  But then she makes a statement which I agree with completely, "considering these people live in real poverty."

So what is deeply upsetting about our proposition to raise $20,000?  Sasha and Alsdair Mitchell clearly know Alhassan ibn Abdullah, Awal Muhammed Basit, Razak, Yahroo, and many other people with us in common.

Below, I'll explain what we were thinking... It's a project to make jewelry out of (clean process) recycled metals, using skilled African metalsmiths, who are willing to tutor Awal, Razak, Yahroo, etc. in making something.  If it's sold online to thousands of @OfficialPlacebo fans, it would create demand for unburned, clean wire.  We have been trying to launch the product for almost a year, we didn't create it opportunistically.  "It's not about you".

What $20,000 means to Sasha is something I can only imagine. What it means to the people we are working with can mean life or death.  Skepticism is warranted. Telling thousands of @Placebo fans not to even look, listen, or learn from us is certainly not "balls of steel".  It's purest form of cowardly.  But I guess she's afraid.  She worked very hard, she wanted to feel good about the film, it is very beautifully crafted and edited.  And her reaction is kind of understandable.

When we showed the link to the "Life is What You Make It" video to the record and t-Shirt sales for Placebo's new Australia tour, I can see that it could be taken as a crass swipe at a well-intentioned effort.  But the video ends with provenly false statements which have been retracted by most of their sources, and they have a devastating effect on negro tech sector workers who purchase used electronics for export to their family and associates in Ghana.  They are not dumping anything.  Every study has found as much reuse in used goods as in brand new. 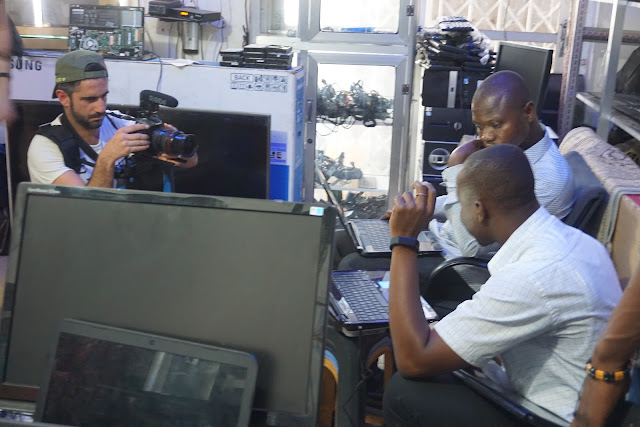 The stuff that gets taken apart by hand in the scrapyard near the Accra slum was usually imported used.  But it was then reused for 5, 10, 15, 20, 25 or 30 years before being sold to scrappers with push carts.  The number of sea containers dumped at Agbogbloshie is not 400-500 per month.  It is zero per year.  This is a crashing, loud, serious mistake which has already put African TV repairmen in prison in the United Kingdom.  Basel Action Network admits it and calls them "collateral damage".

So, if Sasha finds Blogger Robin of WR3A to be an irritant, here are some other names you can look up to ask whether you should be concerned about Sasha's due diligence.  Some are generalists in the topic of "e-waste", others are experts in Old Fadama, Accra (aka Agbogbloshie).