The comment section of this week's Bloomberg Editorial by Adam Minter is probably a lot of "inside baseball" to a lot of people.   But there are a couple of gems.  Take this comment by Jim Puckett, Executive Director of Basel Action Network.


"Despite your reading diligence however, it is unfortunate that you did not start by questioning the baseless assertions made by Adam Minter in his reckless article.   Never has BAN ever stated that 80% of US e-waste is exported."
(-Bloomberg News)


My, my.  That's a bold statement to make on the world wide web.  I've taken a few moments to search the term "Puckett" and "80%" and "exports".    Jim's paragraph goes on to explain that BAN knew there was no harmonized tariff code, and that BAN relied on experts (surveys?)... really trying to isolate the statistic back to 2002, in his paper "Exporting Harm".


"That expert was cited in our report claiming the 80% estimate.   Realize however that we never claimed it was anything other than an informed estimate and we never said it applied to all US e-waste generation but rather the percentage exported of that which was delivered to recyclers. "

That Expert (see bottom) reported on his estimates via the comment field of this blog a few years ago (Adam Minter, a new acquaintance, actually saw this exchange with the expert).  And Jim Puckett participated as well.  Here is a flashback  "Finally!  The Source of the "80%" Statistic Steps Forward!"  And the expert's talking about baled material, shredded material, tested working material... not just primitively burned material (see the exchange in blue at bottom of this post).

Still, the assertion here is this:

Reckless indeed.  Do we really have to go all the way back to 2002 to find the statistic Bloomberg's columnist Adam Minter is trying to hold up to the light?  Oh, wait!  I've got INTERNET!!  Let's take a little voyage via Google and Bing's memory lane.   Search boxes will help jog our memory for some use of the claim between 2002 and 2013.

Bing!  In January 2013, just a few months ago, CAER (a group Jim Puckett cites in his comments, funded by Wendy Neu, a BAN Board member) used the state to promote RERA:


"We believe that currently about 80% of electronics claimed to be recycled in the US are really just “packed and stacked” into shipping containers and exported.  Aggregators of used electronics work through brokers to ship equipment overseas and get paid pennies per pound for this mixed assortment of electronics. We see solicitations from these brokers all the time.

Boink! Here's another post from less than a year ago... With the following quote from the Press Release  (from Placentia, CA), attributed to Jim Puckett, in late 2012:

Pluke! From 2011 in support of RERA legislation banning sale of intact units:


"we estimate that 50-80% of e-waste that gets into recyclers’ hands is exported to developing countries, where it causes great harm."

Now to be fair, the three quotes above do perhaps limit the 80% to that which gets to recyclers, not the entire denominator of used electronics generated.   But OOPS... here  they go again.


BAM!   2011 - Testimony to the House of Representatives Energy and Commerce Committee Meeting (Wendy Neu, 2011 BAN.org Board of Directors) 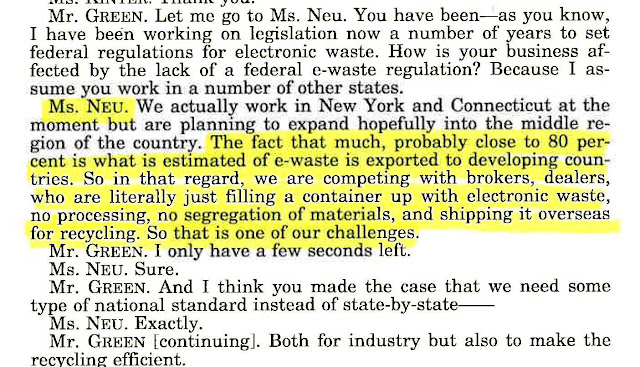 In this case, the statistic is fed to USA legislators to back [HR2791] which would benefit "E-Steward" companies (like Neu's).  Remember, BAN.org gets a share of sales from those certified companies.


"The U.S. doesn't even have such a ban, and the Basel Action Network's Jim Puckett says we are "way behind" Europe on e-waste, estimating that up to 80 percent of e-waste in the U.S. is exported, again mostly to developing countries, primarily China." TLC-Discovery Channel


"It really has become the crisis issue of the whole Basel Convention," says Jim Puckett of the Basel Action Network, pointing to the e-waste generated as people buy flat-screen TVs and switch to digital. "It is really the fundamental, number one issue."  He says the US, which has not ratified the Basel Convention, is "way behind" Europe on e-waste, and estimates that as much as 80% of American e-waste is exported, much of it to China through the port of Hong Kong.  - BBC News


"The dirty little secret is that when you take [your electronic waste] to a recycler, instead of throwing it in a trashcan, about 80 percent of that material, very quickly, finds itself on a container ship going to a country like China, Nigeria, India, Vietnam, Pakistan — where very dirty things happen to it," says Jim Puckett, the executive director of the Basel Action Network, which works to keep toxic waste out of the environment.


Jim Puckett asserts, the dirty little secret of all this, is that 80% of all electronics are being shipped outside of the United States. He says recycling is just a name and it is often times hard for the individual to find out what the company really does with their “recycled waste.” Most people are trying to do the right thing by bringing their old electronics to superstores, thinking they will be safely recycled. In actuality they are being sold to brokers and “recycled” under some of the most horrifying conditions.


"We know all the tricks that people use to hide exports," says Houghton of Redemtech, one of the E-Stewards. He says companies that hire recyclers and "want to do the right thing" lack auditing expertise to track e-waste. He estimates that 80% of U.S. e-waste collected for recycling is exported and that most recyclers "defraud their clients when it comes to exporting."

According to the World Bank, 27% of Nigeria's households owned a TV that year, making Nigeria 26th highest count of televisions in the world (behind #25 Egypt).   6,900,000 TVs in use that year in Nigeria - more than enough to populate its own dumps.

Where does NIH source the *statistic* that most of the TVs in Lagos dumps come from USA sea containers?? Follow the astricks... *Johnson is quoting Puckett's employee, Sarah Westervelt.  Charlie Schmidt is quoting *Puckett, *Puckett is making it up, and *SVTC is quoting Puckett.  He gets 4 citations from the same number, pulled out of the thin air of his imagination.

Whirrrrr..... I could go on... pages and  pages of defamation, going back years and years.   But is it all a big misunderstanding?  Reporters could misconstrue a quote, I guess.   But here it is from Jim Puckett's own Essay "Away is a Place".   Jim Puckett uses passive voice, as if he's just run across the estimate (rather than created it).


Sadly, such global dumping is the global norm, not the exception.  In the US, it is estimated that  about 80% of the old computers, TVs and other electronic equipment given over to “recyclers” are then simply exported.  In Europe, the European Commission claims that 54% of the electronic waste stream is unaccounted for and likely goes to substandard treatment or export.

Really people...? Doesn't Jim Puckett's denial that he made the claim of 80% exports say enough, without me calling him on it?  Do we need to look any further than ten years of Basel Action Network's own press releases and websites to tell us we really heard what we think we heard?  GOODS ARE BEING SEIZED, PEOPLE ARE GOING TO JAIL. Do we let the E-Waste Hoaxers brush off the arrests as "collateral damage?"  Do we sit back as they STONEWALL their own claims? 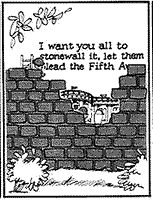 "Never has BAN ever stated that 80% of US e-waste is exported."


So what did the original 80% mean, back in 2002?   Here's a quote from the 2002 Expert, our neighbor Mike Magliaro of DMC Recycling in New Hampshire.


"Even the shredded material was an export item. The boards that had precious metal value were also an export product because there are NO smelters in the USA. They either went to Canada or Europe. Even the tested PC’s and laptops where sold into an export market by container loads."Because China needs huge volumes of base and precious metals, they are the largest buyers of that material in the open market. So even if you sell your base metals to a local scrap yard, there is a better than even chance that it will end up someplace in Asia or in Africa. Any two or more dissimilar metals that are mechanically attached that can’t be shredded and mechanically separated get classified as “Zorba” and are sold into the metals market and are sent out of the USA to be separated by hand. Almost all computers plastic is exported to China from the USA. There are domestic uses for computer plastic but most of it is still exported. Most of the leaded CRT glass is an export product that has limited use and has become a huge concern to the recycling industry."

hahaha! your blogs are such a breather from the holier than thou assertions of bing bloing pluke!Thanks!