E-Stork 4: It's the Journalism, Stupid.

From "precautionary principle", regulators defined export as an action with "suspected risk".  While a case can be made that the risk has been exaggerated, it's too bad that case is being made by me, a self-interested, partisan, biased exporter - one who has no editor and little time to proof-read (cutting too long posts into 4 parts didn't work in college very often, either).

I believe in dialectic, and the "marketplace of ideas", to bring the truth.  But I wish more professional writers would take interest in repair, reuse, knockoff, and tinkering - the true opposite of the "resource curse" in poorer but emerging markets.

The "suspected risk" comes from the same source that cleaned up the Blackstone River.  No, not the Saturday Evening Post.   But journalists.   Ethical journalism provides us a shortcut for proper due diligence, a reason to "suspect" risk.   Until or unless a river has been traced upstream to a repair and refurbishing factory, the journalist can "follow the money trail" and interview people telling both sides of the story.   They have the power to invoke or water down the "populist cognitive bias" against, say, interracial marriage.  Journalists may not be able to tell where our soul comes from, or where it burns when we die, but they have the power to interview people who CLAIM they know.

It's ok that we still believe in heaven and hell as a matter of faith.   As Chaucer said, a thousand times I've heard men tell of joy in heaven and pain in hell... but none of them has been to either place and lived to tell about it.   Faith and crusades are fine for spiritual upstreams and downstreams.   For rivers and environmental policy, we need science.  Journalists accepting statements like "80% of e-waste is exported", without a single fact or figure to go by in ten years, need to wake the heck up.


There has been so much "coverage" of the computer recycling export story that it's difficult to believe that not a single story cites a single source of the "percent exported" statistic.

Simply Google "China Computer Recycling".  The story is overwhelming.  BBC, CBS, Salon.com, USAToday, Treehugger, etc.   In every story, a photos of something bad happening to a computer in China have substituted as evidence that Chinese Refurbishers are upstream of the toxic rivers polluted in Guiyu.  Repair and refurbishing has literally been banned in China.  Tested working used product is called waste.

Therefore, by definition, it is all waste, and when you look up stories about "computer recycling" in China, it's hard not to suspect that the Geeks of Color.  Boycott.  Ban the trade.  End it.  Now.
"Have you stopped exporting?"  When I use an actual, honest-to-god warranty return refurbishing factory, the one with patents on CRT cathode ray guns, the one which produced brand new monitors for 15 years under the names of Dell, HP, Gateway, etc., I cannot get past the ethnicity of the partner.   So for a change from reporters attacking electronics recyclers, let's turn this puppy back around.

Are you asleep on the job?   In 10 years, since BAN has announced the refurbishing business to be "illegal" (despite Annex IX), no reporter went upstream to find how these factories are polluting a river.  In ten years, all we have gotten is pictures of poisoned babies, delivered by the E-Stork.

Basel Action Network should have lost its credibility when they claimed that semiknockdown or SKD factories, which buy and refurbish barebones and white box computers and display devices, were in some way linked, or responsible, or upstream from the toxic piles of burning e-waste in Guiyu.  Instead, their depiction of "semiknockdown" (a term I sabotaged during the California Compromise) is being written into USA law, making it illegal for Americans to sell billions of dollars of used display devices back to the factories that originally produced them!

BAN claimed to PBS Frontline that Ghana technicians were purchasing 80-90% waste for burning... they did nothing to withdraw the statement made to Frontline when the study came out that said 85% of the Ghana imports were being reused.

Having met with me to discuss the "California Compromise", giving these factories incentives to document proper recycling, they wrote letters to officials in those nations protesting their legal CRT import permits, granted under Basel Convention Annex IX.  They did so without a visit, and did so after meeting by skype with factory owners who offered to answer all their questions.  They should have compromised.

That day of reckoning is inevitable.  Media ethics or inevitable discovery...  For here is the 11th ranked link to the google search:

retroworks.blogspot.com/
2 days ago – E-Waste Watchdogs say a significant source of Chinese water pollution comes from primitive computer recycling. At least, that's what we are ...

As more and more journalists research the "E-waste Recycling" issue, more and more questions are arising for which the E-Stork Bloggers have no answer.  If you are a reporter new to this "ewaste export" story, and you want to give coverage to the federal bill which would ban my company from continuing to export 22% of the equipment we collect (we recycle 78%), here is a list of questions for BAN.

Meanwhile, what are, really, the most polluted places on earth?  Answer below.


This blog can be poorly edited, run-on, obtuse industry-speak.  BAN has now enlisted the top brass - Mike Enberg, Lauren Roman, Coby Self and Senor Puckett to launch their own blog, hoping to slow this blog's rise in the google rankings.  Redemtech has launched one as well.  Annie Leonard is producing accessible films of the E-Stork message.  Social marketing of poisoned baby pictures.  Protecting journalists like Ned Flanders protects his sons from heresy, and using black-hat comment link subterfuge to de-rank opposing views.

I for one welcome the new e-waste blog overlords.  I link to them without expecting the favor returned.  The more they say, the more they can be expected to explain.  If the primitive burning in Africa is from AFRICAN used stuff, and the primitive burning in China is from CHINESE used stuff, and the importers are not "waste tourists" but people trying to get good deals on used equipment from nations rich enough to shred their money... How do they explain the massive fraud behind E-Stewards Recycling?  Will you please stop saying my friends kill babies, please?  Will you admit my friends are not upstream?

With all of this firepower, why do they cling to the lie that Geeks of Color are doing something wrong?  Did the monitors circled by CBS in Hong Kong go to Guiyu?  Or did they go to this factory (photo) which I brought BAN pictures of in 2005?  Was any arsenic traced to this factory?  Were any barefoot children inside?  If so, BAN should throw out their own new electronics, because the same owner of the same factory is making cell phones and IPads and laptops today.

If you attend church, or government, or a college football game, and you find out the leader of the group is lying, you need to call a stork a stork.   Western medicine did not evolve by covering up for snake oil.  If a remedy, like an export ban, is bad medicine, we have to have the guts to stand up and speak out.

Whenever we go to the source of pollution, we find consumption.  Two types of consumption:  sustainable and unsustainable.   Reuse is sustainable consumption - rescuing a reuse item from the shredder is heroic.

The world's population is now 7 billion.  Bras, cars, carpet, newspapers... mass production centralizes employement and creates pollution and makes goods affordable.  Creating barriers to consumption, by mandating "local", or "organic", or "natural", tends to benefit those who can afford it.

Externalizing Harm:  As the developing world industrializes, there will be more Blackstone Rivers, more Louhajong Rivers, Cape Fear Rivers, and Ok Tedi Rivers.  Textile mills from Massachusetts did flee for North Carolina as the first environmental regulations emerged.   And textile mills from North Carolina fled for China.   Externalizing costs is a problem.  Enforcement against secondary copper smelters (all 7 closed in the past 50 years) drives copper scrap to China.  That does not mean that Chemetco should have been left to pollute water in Illinois (demolition of the Chemetco recycling smelter began 10 weeks ago).   As a former regulator, I know you must be ready to stand by your guns and make unpopular decisions.  But you have to know that the perfect can be the enemy of the good.

Some of the "costs" being applied in the USA - like a ban on export of repairable laptops and display devices - are stupid and wrong.  Driving a business out of your state because it's polluting is painful.  Driving a business out of your state which is a model of fair trade and sustainable production is hideous, and will undermine the environmental authority.  If not one drop of pollution comes from a refurbishing factory, and you tell the press that factory caused the pollution, you are a modern lynch mob organizer.

Cognitive Risk/Dissonance:  Showing photos of poor children at the riverside supplies fight or flight responses in humans.  Environmentalists fight with money, which creates the same kind of perverse incentives that greedy businessmen are pegged to.  With enough pictures of kids, and ju-ju words like "arsenic" and "toxin" and "cadmium", mixed with newfangled technology words like Microsoft and cathode ray and capacitors, we can convince journalists that 80% of used goods purchases are actually waste tourists spending money to buy pollution as a favor to people externalizing costs.   Interpol says the nasty black people are organized criminals, because they inspect and cherry pick working equipment for export to murky nasty dark places. 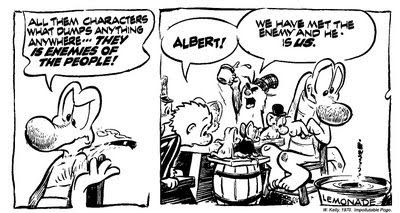 Environmentalists, we have met the enemy, and he is us.  I grew up in Arkansas, son of a journalism professor, great grandson of an Ozarks newspaper publisher, reading Walt Kelly.


I care where the MOST POLLUTED PLACES really are, and I care where the toxics and arsenic in those places really came from.  Excerpt from SOS-Arsenic below...  Five of the top ten are virgin metal mines and smelters - the opposite of recycling.  Attacks on recycling constitute an own-goal, environmentalists attacking themselves.

As long as you read this far - here again, is Clubbed To Death... What Watchdogs did to Geeks of Color.

*(Vermont regulators require me today to write down what "tested working" means if I sell to an African... I cannot simply write "tested working" and verify that the African buyer agrees it's tested working and sign a paper and pay me 6 times , I have to have the definition approved lest the black guy and I agree in person as to what he wants and we are both wrong and the regulator in Montpelier can save us from making a mistake using their superior technical schematic understanding).
Posted by Robin at 12:18 PM