"We don't want to have to go after you." - JP to yours truly during California Compromise negotiations in 2010.

"I'm not hiding anything, and don't think much of your threats" - My response.

Basel Action Network "goes after" people through the press. This week, The Guardian's environmental desk proves just how easy that is.  Sandra Laville's headline "UK worst offender in Europe for electronic waste exports - report" diligently puts out the hit, failing to interview a single African or Asian technician or importer. 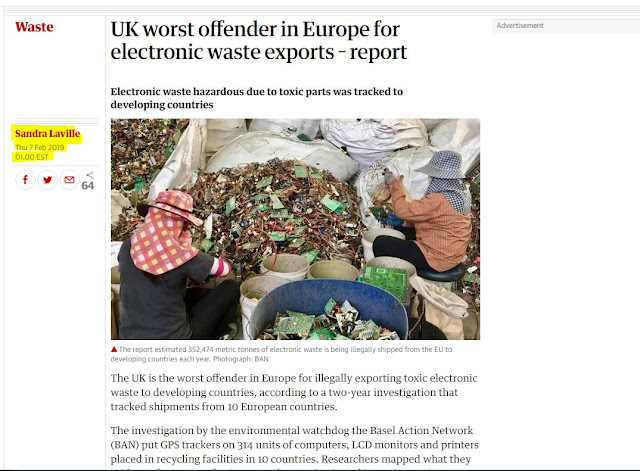 Mistaking Africa's Tech Sector (importers) for Africa's Scrap Sector (city wheelbarrow scrap collectors) is like mistaking a surgeon for a janitor because he's black.  The only proof BAN provides is a photo of a janitor.

There are several other really really simple things to find on the internet which should have given The Guardian's editors pause. I'll tick them off briefly, but stick to the point. BAN has created a problem that wouldn't otherwise exist (false reporting, sabotaged equipment, fake statistics) for the purpose of generating millions of dollars from BAN E-Stewards. BAN not only threatens companies that don't pay them, but makes examples out of those of us who defend the Geeks of Color. It is the valedictorians in the Tech Sector who suffer the worst consequences of BAN's sabotage.

BAN doesn't just sabotage their equipment. It sabotages their reputation, and the reputation of anyone with the courage to trade with them, rather than boycott them. (In Part III, we'll look at who finances this sabotage).

Is the Guardian an unwitting and unwilling accomplice? Or is running a story like this, without due diligence, a case of willful negligence?

The Guardian should have researched the section of the article claiming violation of  international law.  BAN claims to be an expert. Did Sandra Laville actually read the relevant pages of the Basel Convention, or articles about it? Did she ask anyone (like Katharina Kummer Peirry, former Executive Director of Basel Secretariat) if BAN's claims about the law were true?

BAN wants to AMEND the Basel Convention to eliminate the legal import of used electronics by Africa's Tech Sector. The Convention clearly allows this under Annex IX, B1110, and BAN has admitted this on multiple occasions, calling for a "Ban Amendment" to make it illegal.

This is part of the "Deceitful Service" BAN offers. They claim to a watchdog for international law, but misrepresent what the law says, while trying to amend it to say what they want (job security).

Just a few examples of the "Deceit" necessary for a case on Racketeering:   BAN makes up statistics about how much of the used equipment get reused by African consumers. BAN sabotages nice looking equipment, sticks a GPS tracker to the African Tech Sector buyers. and then runs ludicrous pictures of African city dumps (like Agbogbloshie) claiming they (the Africa Scrap Sector) represent the buyers.  Like orphans are pooling $20,000 for a sea container to import junk to burn it for $200 worth of wire.

Sandra Laville and the Guardian desk became - like the African recipients of sabotaged computers - unwitting and unwilling participants in the racket. But it is a reporters job not to be naive, and an editor's job to require due diligence. BAN's HOAX has been extremely well documented, and not just here. Any editor at the Guardian doing a cursory background check on Jim Puckett and BAN would find that he's been attacking Africans and Academics who defend them, using disgusting stereotypes of "orphans", "rice paddies", "shantytowns" and "primitives".

BAN's use of unwitting reporters like Sandra Laville to run stories that result in investigation of good people like Joseph Benson, Craig Lorch, and Jeff Zirkle is explicitly used as a threat. Jim Puckett said to me "I don't want to have to go after you" as an explicit warning to stop this blog.

RACKETEERS OFFER A DECEITFUL SERVICE TO FIX A PROBLEM THAT OTHERWISE WOULDN'T EXIST.

Negative press stories are a real problem for recyclers like Total Reclaim and BJ Electronics. And BAN's deceptive use of GPS trackers - which are never placed in junk, but only in equipment that unwitting and unwilling African Tech Sector workers are willing to buy - seems a textbook case.

Jim would later offer me a "carrot"... he said he would be able to "discount" an E-Stewards certification package for Las Chicas Bravas, if I stopped making the case against him in this blog (I asked the ladies coop, and they said something to the effect "Isn't that the man who said mean things about your nice partners in Malaysia?")

For reporters who act as Jim's Henchmen, search the terms "e-waste" and "Criminal Negligence" to fine European researchers who also published reports based on Jim Puckett's "facts".  Then, see what press Jim Puckett authored about the editor of Discard Studies (publisher of the fact checks).  Or look at what he wrote about me. Or his organization's smear campaign when a reporter asks for a second opinion.

Dr. Josh Lepawsky did a pretty good job of defending himself, via a look at BAN's claims about his payola, and how BAN's charitable 990 IRS filings show where it makes its money... almost all of it from the industry BAN threatens to "go after".

So let's return to the definition of Racketeering.

Pay to play, payola, protection money. Over and over again, Jim has wielded the E-Stewards Certification, and his recognized authority as a "watchdog", to threaten recyclers with negative press - press he garnered with a false, fake statistic, and articles published which ridiculously exaggerated the extent of e-waste "dumping".

- If you paid BAN, you might get inside knowledge and access to GPS tracking information. At least one case of this is absolutely proven.

- If you criticized BAN, you might get slipped a mickey. If you sued BAN for defamation - as Bojan Paduh did a few years ago, BAN might distribute 14% of all GPS trackers in your country to YOUR facilities (something gleaned from BAN's Canada report this summer).

In Part III, we'll continue to examine the case that Basel Action Network and its E-Stewards fundraising campaign is using deceipt to create a problem that otherwise would not exist, and is selling the solution for money. Sandra Laville is just a patsy in this. But that's no small insult to a reporter.  It's easy to simple say that Jim's a good person, and means well. But extortion, racketeering and false claims are far worse than other good people, like Craig Lorch, Jeff Zirkle, or Joe Benson are accused of doing.

RACKETEERS OFFER A DECEITFUL SERVICE TO FIX A PROBLEM THAT OTHERWISE WOULDN'T EXIST.
Posted by Robin at 9:19 AM