How does Basel Action Network define Africa's Tech Sector, who purchase affordable solid state electronics for import, as a "Problem"?

First, look at their words.

Next, look at their claims.


80% of all ewaste is exported... Stuff at dumps imported days before... Children and teenagers... Most die within 5 years... Illegal under Basel Ban Amendment...

And we can't look away from their photos.

At first glance, these are meant, like a tear-jerking Humane Society sad-dog-trick ad, to appeal to retiree church ladies or college PIRG fundraisers.

That is not who funds these ads. The poor kids herding goats at African landfills do not benefit.

Part II assessed BAN's service technique of selling a sabotaged (but nice looking) computer or TV with a GPS tracker inside to someone who does business with Africa or Asia's Tech Sector. Through a "Tracker" service they sell for money, you can investigate a competitor's sales. To legitimize the spy-ware (literally "ware") they try to make it about pollution and children.  They send reporters, like BBC Raphael Rowe, to a dump in a city that has had TV stations and electricity for a half century, and tell the reporter it used to be a lush paradise until bad, bad African repairmen imported waste to burn on it. But usually, they just send the reporter pictures, fake stats, and halloweeny words.

Racketeering often involves a conspiracy, a complicated system of money laundering, even through charities (USAToday). If the IRS investigates this NGO, through a complaint form 13909, there might be a domino effect. If billionaire corporations are privately benefiting from false claims, they could wind up at the sharp end of the Lanham Act. And million dollar settlements may ensue.

Take a look at the photos (below) Jim is taking now....
As we pointed out in 2013, the Secretariat of the Basel Convention Switzerland strongly disagrees with Basel Action Network. From a 2012 Nigeria E-Waste Assessment Study:


"Refurbishing of EEE and the sales of used EEE is an important economic sector (e.g. Alaba market in Lagos). It is a well-organized and  a dynamic  sector that holds the potential for further industrial development. Indirectly, the sector has another important economic role, as it supplies low and middle income households with affordable ICT equipment and other EEE. In the view of the sector’s positive socio-economic performance, all policy measures aiming to improve e-waste management in Nigeria should refrain from undifferentiated banning of  second-hand imports and refurbishing activities and strive for a co-operative approach by including the market and sector associations."

"I am very satisfied with the quality of the UNEP studies. I know well the authors and have worked with them and discussed findings with them." - Jim Puckett, Basel Action Netowrk


So the Basel Action Network is not working in sync with the Basel Convention Secretariat, whose Convention they insist must be amended. So who does fund them?  If they are a charity, they cannot support legislation (such as the amendment). They must be funded by private donations, without an personal or business benefit accruable from those donations. Right?

The IRS gets 13909's every day. People write books about the Trump and Clinton Foundations adherence to 501-c(3) charity rules. The IRS does not comment, and should not, as policy. Otherwise, it would be too easy to submit a 13909 and then claim the target charity "is being investigated".

So it proves nothing if we know BAN has a 13909 open on its charitable status. However, it should be of concern to the legal offices of BAN's funders.  Hypothetically, if an NGO lists itself as a tax-deductible charity, any donor who has written off income to their "participatory" work in the charity's certification could be participating in a tax violation. And tax violations can get serious if there is an underlying fraud.

What is worse than donating to an ineligible charitable foundation? Funding targeted defamatory projects to specifically injure competitors businesses, covered under the Lanham Act. False advertising, false claims, depositing rigged computers as a "donation" at charities, and doing it for donations that are based on scale (commission), it all fits under Racketeering.

This series kicked with the indictment of Jeff and Craig at Total Reclaim - E-Stewards who paid BAN hundreds of thousands of dollars - for fraud.  They plead guilty. But there's another fraud they should plea to.  After 10 years of investigating the false claims about Guiyu and Agbogbloshie and exports that put poor Joseph "Hurricane" Benson into a 60 month prison sentence, Total Reclaim is in a position to explain the funding, the way they were informed in advance of the GPS placement as a reward for the funding, the way they allowed certain hardware to be selected from their Seattle donations for tracking, the way they could have found, in real time, where the GPS devices were place if they paid the NGO paid even more.

In the a quote to the trade press (E-Scrap News), a statement from "BAN" speaks volumes.

In the European study, BAN claims not ot have intentionally targeted anyone. This is very interesting. I asked editors at EScrap News whether this was offered in response to a question from them, and whether they followed up as to whether that was also the case in the Canadian study last summer, where 14% of all devices were placed at Bojan Paduh's ERA offices (Bojan was previously in a defamation lawsuit vs. BAN). And whether it was true at Earthworm in Somerville, MA, where BAN's interns had to use an elevator to bring a GPS tracked printer to an unmarked office. Jim told me they found the office not a a public drop off point, but because of their website listing Vermont as a their endpoint.

So what do we have as evidence of racketeering?


Here is a screenshot of that email, cancelling deliveries of our printer scrap, while the Somerville MA tracked printer was in our warehouse, being opened.

This may be the smoking gun.  Or it may be revealed soon in BAN's response to ERA's lawsuit, which directly accuses BAN of violations of the Lanham Act.

9. BAN racially profiles and defames legal overseas Tech Sector for engaging in the Right to Repair.

BAN claims that the United Kingdom is the "worst offender" while simultaneously LESS THAN 4% OF THE TRACKED DEVICES WERE EXPORTED.  That 3.5% includes EAST EUROPE (e.g. Bojan Paduh's home country Bosnia) as well as Africa. But even in Africa, look at what Jim Pucket is taking pictures of, displaying himself so proudly on BAN's website. 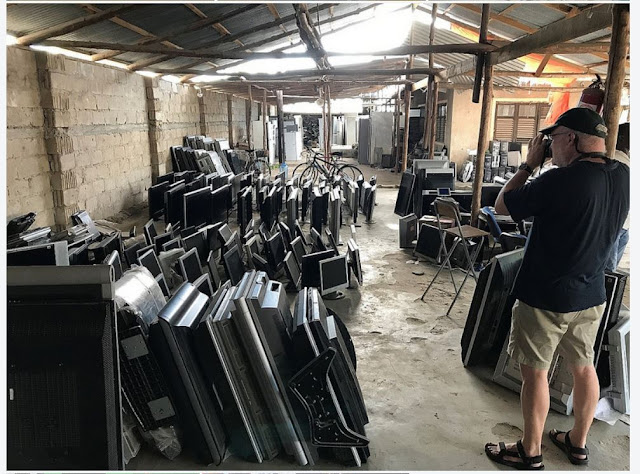 Jim Puckett told me, personally, that he considered Benson "COLLATERAL DAMAGE". Yet, Jim paraded the latest GPS lynch mob through The Guardian this month, so he seems not too torn up about it. And now he's snapping shots of African TV repairmen, and getting too many journalists to run it as evidence of "Offenders".

This isn't collateral damage. This is exactly what BAN, and its funders, are aiming at. They are going after our right to repair. The Scrabble word is R-A-C-K-E-T-E-E-R-I-N-G. The costs to society, of affordable recycling, affordable devices, the best jobs in Africa, and a circular economy are intense.

In Certification and Racketeering Part 4, let's look at Basel Action Network and E-Stewards money, and what they are trying to say about legal Repair. Basel Convention has yet to be amended, and repair is definitely legal, no question. If individual European countries have placed "fully functional" or "tested working" in their own statutes, it is a violation of the WTF Doha Round on exports of repairable items and cores, and would completely undermine warranty repair for anything manufactured outside of Europe.

Is it legal, as a charity, to accept program services based on sales commission?  I don't think so. We will look, again, at the Annual Licensing and Marketing Fee Schedule (2016). Big Shred (the largest recycling companies, who install million dollar shredders to compete with the Tech Sector overseas) pays up to $90,000 per year.  And of course, not a penny of that goes to the children that BAN likes to photograph at so-called "third world" city dumps.

Look closely at the African Jim gleefully points his camera at. He is fixing a CRT TV, the kind the majority of households in Lagos and Accra owned in 1999.  Jim shows no evidence of any imports of CRT in his study - he does not even place GPS devices in CRT TVs, despite the fact they are the most expensive waste to dispose of legally in Europe.

This African is clearly repairing a TV that was imported over a decade ago, and was clearly not imported "days earlier".

A black man repairing a televisions set for another African.

What else do they want to stop?

If this IS racketeering, donors better get their act together before they are found in collusion over the targeted placement of devices, which BAN newly claims not to be doing in the EU study, which showed less than 4% export - Not BAN's claims of 80%. 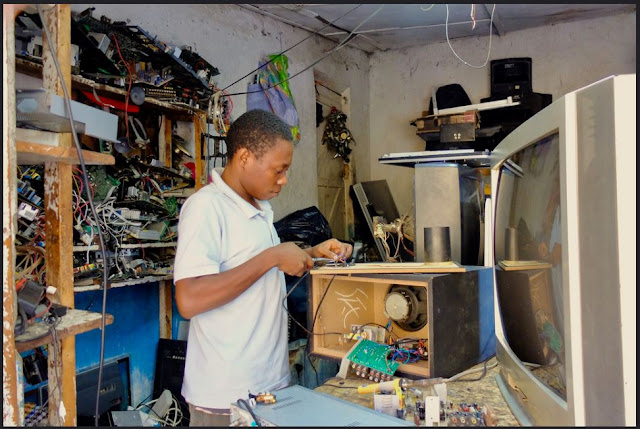 BAN gets money from Big Shred, and money from Planned Obsolescence (original equipment manufactures)  Both of those industries have a common foe - The Right to Repair.