"Racketeers offer a deceitful service to fix a problem that otherwise wouldn't exist."

Let that definition sink in. 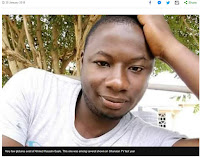 "On 16 January, Ahmed Hussein-Suale, a Ghanaian investigative journalist who had collaborated with the BBC, was shot dead near his family home in Accra. Ghanaian police believe he was assassinated because of his work." - BBC

His work exposed bad calls from African referees, paid bribes to control the outcome of soccer matches. It's a textbook racketeering case, with a deceitful service (bad calls) sold to change the play that had occured on the field. People were convicted, resigned, or fired as the truth spread. And Africans who had watched the matches on TV and seen the bad calls with their own eyes, grew to esteem the Tiger Eye Team of Hussein-Suale and Anas Aremeya Anas.


In part 2, I'll bring this connection to a bad call about e-waste exports, and who benefitted financially from the tall tales of foul exports.  But today, lets keep our attention on the families of reporters in an era when Russian Mob Style treatment of journalists is spreading. Ghana ranked as the most friendly African nation to journalism, the most transparent. But there is a vicious attitude by authorities against the press, and its spreading.

Ahmed Hussein-Suale was from Northern Ghana. Working as an investigator under Anas Aremeya Anas, he had recently exposed Racketeering among African football (soccer) referees, which led to over 100 separate resignations and firings. He was a very real example of a "Watchdog".


We don't want to leverage every tragedy into a soapbox. But Hussein-Suale worked for a Watchdog group and exposed racketeering in Ghana (football referee scandal), and got murdered. The politician who outed him - and publicly cried for revenge - alleged the journalist watchdog group was itself part of a shakedown (the politician's words before the murder are dangerous and disgusting that (my skin crawls on my fingers to type it).


When Tiger Eye aired its latest investigation, which exposed widespread corruption in African football, Ghanaian MP Kennedy Agyapong began a campaign of hostility against the team, saying he was offended by its undercover methods. He called publicly for Anas to be hanged. Weeks after the film was screened, in June last year, he used his own TV station to attack Hussein-Suale and expose the journalist's most closely guarded secret - his face.
"That's him," said Agyapong, as images of Hussein-Suale appeared on screen. "His other picture is there as well, make it big."

If Anas Aremeya Anas and Ahmed Hussein-Suale had been doing something other than exposing the truth, why did so many referees resign or get fired? Methinks the protest expressed by the MP speaks volumes too much.

The photo BBC used was taken during one of my 3 on site investigations of another so-called watchdog (Basel Action Network) and another so-called Ghana investigative journalist, Mike "Fishing as a boy" Anane, in pursuit of the truth in Agbogbloshie, and investigating evidence of certification as "a deceitful service to fix a problem that otherwise would not exist."

MP Agyapong cried out for revenge, seething against a journalist because the problem - racketeering and sports corruption - did in fact exist. His crude and vicious attitude towards the journalist called for violence to suppress information and opinion.

Anane represented himself as a reporter like Ahmed Hussein-Suale. A Jim Puckett champions himself as a Watchdog, like Anas Is Watching. But in fact, the story behind the imprisonment of Joe Benson, Project Eden, and the E-Waste Hoax of Agbogbloshie, is much more similar to the soccer referee-fixing racket that Hussein-Suale and Anas exposed.
~ ~ ~ ~ ~ ~ ~
Take the time first to read about BBC informant and African journalist hero Ahmed Hussein-Suale. The rest of the blog - Part II - will still be here when you get back.
~ ~ ~ ~ ~ ~ ~