I have gotten a copy of the ~10 minute interview Jim Puckett did with a documentary filmmaker from Spain, on the subject of Agbogbloshie, Ghana. At the end of the video, Jim evidently didn't like his answers, whips off the mic, and leaves, saying he refused to authorize the use of his video.

"Do you know the name Joe Benson?"

Someone asks you the name (John Smith, Mary Johnson?) and if you don't know them, is it a "biased question"?

Jim got his wish, and none of his interview made it to the documentary. But I have managed to get a very bad raw copy of it from an online upload site. The clips were uploaded in the USA (en route to Europe), and I have a copy of what the European documentary maker received (but did not use). If anyone is sued, I can testify that I obtained this directly from a third party cameraman hired from Florida, and not from the Europeans.

I will try to get some of this video out this weekend.

No, Jim. It is not my documentary. I hate a lot of it. But the makers really made a true effort to get all sides of the story of Agbogbloshie. But I didn't state they don't have my permission, so I'm in the film, and you are in the snipped out parts. 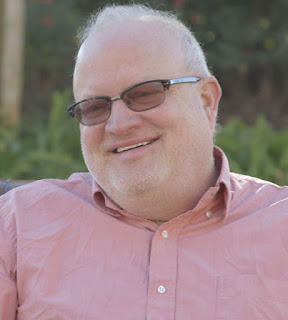 It was important to wait until the Europeans released the finished documentary, which won a Green Prize at Deauville Film Festival.  Jim called the documentary biased, and claimed that Robin was involved in the editing of the documentary in a comment he posted to EScrap News.

I absolutely did not. The Blame Game documentary just shows the varied opinions on the subject of Agbogbloshie, from EU Activists to UK police to Ghana Tech Sector to Ghana EPA to scrappers... If I fault the film, I think it errs on the side of TMI.

The documentary clearly interviews all sides (unless they interviewee states "I do not give permission and did not sign the release form!"). There are a lot of things in the documentary I disagree with, and some that I would have cut out for being misleading or sensational. No one can look at the film and accept that it's unfair.

I would like to invite an Academic scholar to review the unedited film an judge whether the questions were biased, and edit it to ensure we have not slipped Jim a Jimmy.

Biased Question Number One: What is "waste"? 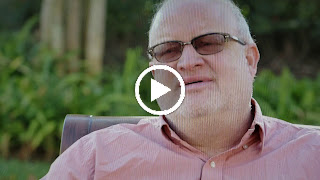 So why did Jim not want to be a part of it? Why not be on the record? The film opens with several minutes of Jim saying whatever he wanted, waxing on about the "swamps of Agbogbloshie" and other things. It isn't until the latter few minutes that Jim realizes that the interview questions showed a lot of research and preparation.

2. Jim is asked point-blank whether 80% of exported electronics are waste, or 15%. This was after Jim had told Bloomberg that he agreed with the E-Waste Assessment studies funded by Secretariat of the Basel Convention, a quote provided to the documentary team. Jim calls the question "biased", and then says that "nobody knows". At this point he starts to look very uncomfortable.

3. Jim claims not to know the name "Joe Benson".  But then immediately calls it a "biased question".

4. Jim then calls off the interview, removes his mic, and states that he does not give permission to be in the documentary.

I have very low quality film of the film.

I also have very low quality recording of Jim, interviewed at the E-Scrap Conference with a hidden mic, acknowledging that he did in fact know exactly who Joseph Benson of BJ Electronics is, and calling Benson "collateral damage".

After his interview, Jim Puckett tried to tarnesh the documentary by claiming, in written comments to E-Scrap News, that it was "Robin Ingenthron's" documentary.  See how he tries to back off of his public claims about Agbogbloshie, while at the same time taking me down personally. He would follow this up with a GPS tracker, which he'd again profile me for (and my upstream and downstream USA clients - he never actually claims my company exported anything, as we did not).

If the comment below, and his video comments I'll be sharing, demonstrate a conflict of interest with the unwitting and unwilling subject of the GPS Study, then one might expect MIT's legal department to sever all ties with BAN's GPS efforts and to refer all reporter comments to the Legal Department.  It seems MIT might believe, as I do, that Jim has entered into a criminal conspiracy to specifically target people whose views he wants to discredit.  Note one of his criticisms is that I evidently did not use GPS tracking devices.  This is a year before Monitour.

And yes, Jim, I did visit inside Tema's yard where the sea containers are inspected and unloaded. Saying to people I never visited was an outright lie. 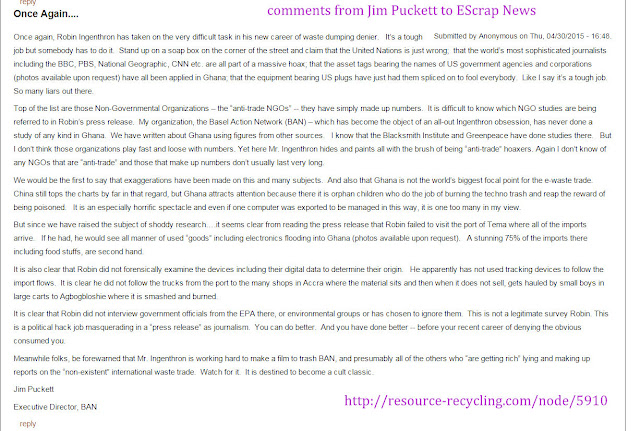