How Agbogbloshie Should Have Been Presented (Katie Jane Fernelius)

Once you get the sensationalist headline out of the way, this week's article in The Nation provides stunning contrast with the reporting that began 5 years ago about the so-called "Largest E-Waste Dump On Earth".


"The Global Garbage Economy Begins (And Ends) In This Senegalese Dump"
https://www.thenation.com/article/garbage-china-senegal-economy/

I'll kick off the New Year by posting a few excerpts. But it's better to read the whole article, as it contrasts incredibly sharply with the lazy photojournalism which depicted African scrappers as helpless primitive victims. Fernelius obviously listens, and either wasn't being fed any Mike "Fishing As A Boy" Anane nonsense, or took the time to research and collect the type of data that would prevent the kind of journalism malpractice applauded a decade ago. 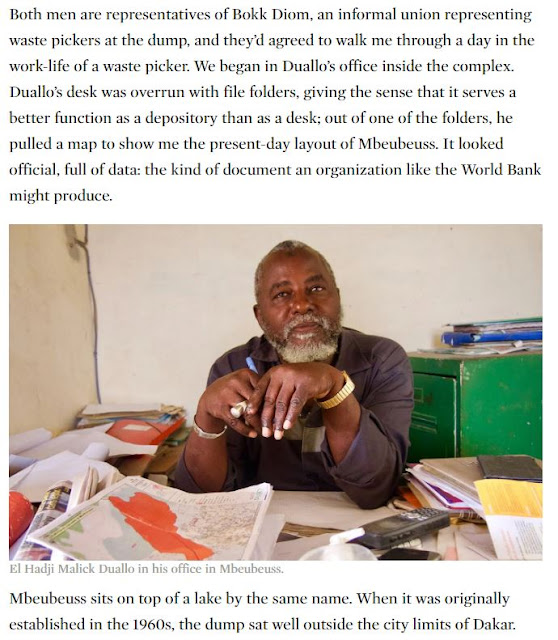 The article begins and ends with the Senegalese Recycling Union representative El Hadji Malick Duallo at the Dakar dump of Mbeubeuss. He's presented as someone knowledgeable about scrap markets, able to leverage Chinese and European and American investors (and experts). A real grown up, in stark contrast to the "thousands of orphans" described in Jim Puckett's cringeworthy 2010 portrayal of Agbogbloshie... "A Place Called Away". Yep, it is one decade ago that BAN's Puckett described Accra's dump as a hell of injustice, kicking off Interpol's Project Eden, sending dozens of naive European photojournalists to interview Michael Anane, etc. etc.

That year, I was still trading with Senegal, and had produced a short video featuring our partners there, which attempted to depict Africa's Tech Sector as savvy and laudable. Midway through Katie Jane Fernelius article, she cites Dr. Josh Lepawsky and Adam Minter, and summarizes their insights with literary skill... It is not just the tech sector who deserves respect. It is not just #freeHurricaneBenson being profiled with GPS geography-as-bigotry.  The scrap sector, too, deserves our respect.

"This challenges a familiar story about garbage, in which trash becomes a facile metaphor for global inequalities between the haves and have-nots. In this narrative, the exurbs of the Global South are unwitting recipients of the waste produced by the excessive consumption of the Global North; where the supply chain has a clean beginning and end for each object from production to landfill; and in which the people fated to sort through that garbage, like the waste pickers of Mbeubeuss, are powerless victims of globalization, a provincial and doomed lumpenproletariat. This is the narrative undergirding documentaries like Trashed and Plastic China.

“The prevailing narrative around waste dumping never gets beyond investigating even the most basic surface economies of how much it costs to get the stuff from point A to point B,” says Josh Lepawsky, professor of geography at Memorial University and author of Reassembling Rubbish. “The assumption is usually just made that because it’s going from so-called developed countries to developing countries, it must be because it’s cheaper there,” Lepawsky says. “But when you look at things like landfilling costs and shipping costs, it’d be cheaper to not ship our waste away. So why spend all that money to send it away if it’s just cheaper to send it to a landfill here?”
The main reason why garbage is exported out of America is because someone outside of America is buying it. Usually, they are expecting that they will be able to make enough money from the waste to recover the cost of shipping that they paid. And the reason they are expecting that is because much of what we waste is recoverable and sellable: At Mbeubeuss, plastic and copper are among the most popular materials separated and sold.

“It’s important to step back a little bit from waste as a universal category,” Lepawsky says, meaning that it’s important to interrogate what is classified as “waste” in the economy.

Adam Minter is interviewed as well as Josh Lepawsky (blog readers know our history bringing experts to look behind the smoke and mirrors of Basel Action Network and Greenpeace boogeyman journalism).

Better yet, here is one sample of the type of quote you get when you LISTEN TO AFRICANS rather than to brave white experts like myself.


“I want an association for all of West Africa,” Duallo says while raising his fist. He said that efforts to unionize at the dump were not enough given that manufacturing in Africa relied heavily on their efforts. “Eighty percent of products for factories come from waste, so we must advocate for our value.”

https://katiejanefernelius.com/
Posted by Robin at 12:47 PM