2020 Vision: What to Expect In Good Point Ideas 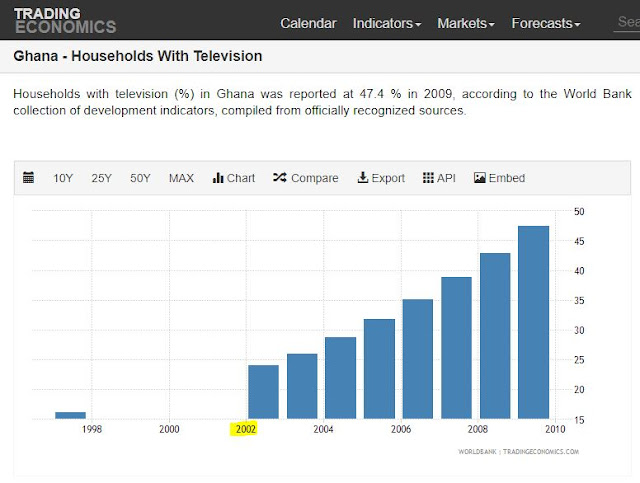 While the population in Africa is growing very quickly, it is not growing nearly as quickly as the number of televisions (and phones, computers, other electronics) per household.

When you study the number of years that Africans have been watching TV (see Dr. Graham Mytton's "Mass Communication in Africa" 1983), the shocking thing about Agbogbloshie is just how bloody few TVs are at the city dump. Africans keep fixing and fixing them, using them over and over, longer and longer.

Somehow, however, the world has been fed a story that places Africans as primitives surrounded by burning waste electronics delivered by evil people in the west.  Somehow, good reporters are sending a message to boycott and arrest citizens of Africa's Tech Sector.

Here's a 2019 report from France 24, by Franck Hersey... no evidence of any research of % of Agbogbloshie waste from electronics vs cars, no "baseline" research of how much a city like Accra normally generates (not imported waste, but eventual waste). No interview with Grace Akese, Emmanuel Nyalete, Adam Minter, Robin Nagle, Jenna Burrel, Josh Lepawsky, Ramzy Kahhat, etc. Our pal Awal Muhammed of Savelugu and Tamale - the most photographed man in Ghana - gets plenty of screentime. Franck Hersey actually films Awal pointing to a 1990s Sony TV and pretending to read that it was Made in France...

Accidentally bigoted reporting has been a theme of the blog. And its still a problem. But I'm not feeling that important to the fight any longer. Is it time for Obi Wan Ingenthron to lower his light saber and join the blue ghosts?

Seriously, anyone with a piece of paper and a calculator can see that only 500 to 1000 TVs fit in a sea container (depending on the size of TV and the packaging), and that the cost of landfilling or recycling them in the UK or USA is far lower than the cost of shipping them overseas. But even after the NGOs have confessed to exaggerating the statistics - and a year ago, PROVING themselves wrong with a GPS tracking study of devices in Europe found less than 10% exported - the denigration of negro repairman is a stubborn thing indeed.

Speaking of stubborn... I think it may be time for me to let this blog go.

Mistakes are still being made in the press - lots of them. But there is now a small force of justice warriors, myself included, waging the defense on Twitter.  And if you focus on the second of my tweets (to correct the Financial Times datajournalist @Alekswis (more below), it's pretty easy to just link to articles and data that has already been published. 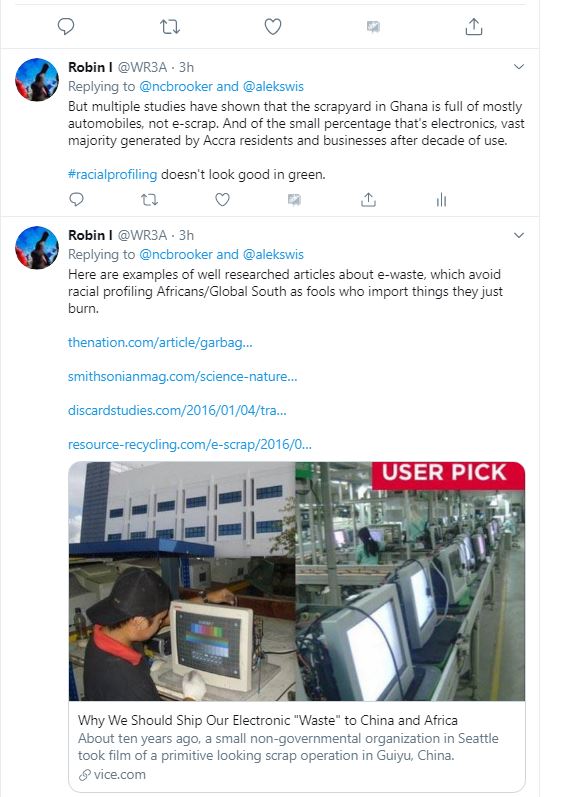 I'm not going to quit the blog, but I think I should post less often, and rely on other social media to educate.  The blog accomplished very much (many of the links above are written by authors and researchers who started out interviewing me because they were reading the blogs). And there will still be news stories and interesting things to write about. But Adam Minter stopped updating his ShanghaiScrap.com blog, and perhaps I should do the same.

Twelve years ago, this blog was asking important questions about assumptions press and policy makers were making about electronic "waste" exports.

I was one of the few people who had 30 months experience living in the so-called "third world". I had seen what Hans Rosling and Gapminder described as incredible progress. I had grown up with a Hollywood and American Press stereotype of "hillbillies" in the Ozarks (and was well aware that we sometimes played to the type), and I'd seen many of the same ingenuity and change in emerging markets.

As the eldest child of my generation, I got more than my share of time with the grandparents (and some great-grandparents), and perhaps for that reason have always been genuinely interested in talking to people much older and more experienced than myself. I spent countless hours talking to my mother's "hillbilly" parents about things I'd experienced in the 1980s in Cameroun, and comparing those experiences to theirs in the 1920s, 30s, 40s and 50s in the Ozarks.

I had about 9 years experience as an environmental regulator, and can honestly say I'd played a strong role in setting USA's national policy in regards to CRT recycling and reuse (including exports). My college degree was in international relations, and I'd spent a whole semester studying at the United Nations in Geneva, Switzerland. I speak French fairly fluently, and am married to a French citizen.

But perhaps most importantly, I can spot a fraud. And I'm fairly thick skinned about calling attention to phony allegations.

For a period, this blog seemed almost unique in its defense of reuse - and indeed "recycling by hand" in the developing world. By 2010, I was referred to in Vermont as a "lightning rod". Jim Puckett of Basel Action Network threatened me to my face. "We don't want to have to go after you, but we will if you don't stop criticizing us in the blog," or something to the effect, Jim said to me when he approached me with an olive branch for Retroworks de Mexico....

Anyway, the point here is that there are now a thousand Robin Ingenthron blogs, and the lovely dandelion seeds have covered everyone's yard in yellow flowers. But it is also time to reflect on how important it is, really, to continue.

In sixth grade, I joined a choir, and was told after some weeks that the important role I played was that I really could not sing well, but that I sang so loudly, that other boys in the choir would raise their voices to cover mine up. I think that its safe to say that has happened in electronics recycling export policy.

There are still flare ups. Financial Times just this weekend ran a tired story, based on a year old BAN report, saying that the UK was the "worst exporter" in Europe.  By worst, the writer assumed that countries which BAN found not to export at all were "good" or "model" nations. The GPS trackers set in the UK only had 3 cases of export, less than 5%.  But 5%, FT reporter Aleksandra Wisniewska was led to believe, is too much.

Question for Franck Hersey and Aleksandra Wisniewska:  Which EU country is "worst" in interracial marriage?

She tweets interesting articles about #datajournalism, a hashtag I very much follow. I don't want to pick a fight with her, but the article she wrote contrasts sharply with the one by Katie Jane Fernelius the blog gave the shout out to just last week.

The point of this is that the blog continues to have an anti-defamation role.

But I'm no longer alone, and there are now plenty of people - and publications, like Discard Studies - carrying the ball.  The #ownvoices movement has recognized that people like Jim Puckett are claiming to speak on behalf of non-white technicians and recyclers in emerging markets, when there are plenty of people like Emmanuel Nyaletey, Grace Akese, and Oscar Adrian Orta who can speak for themselves, thank you. 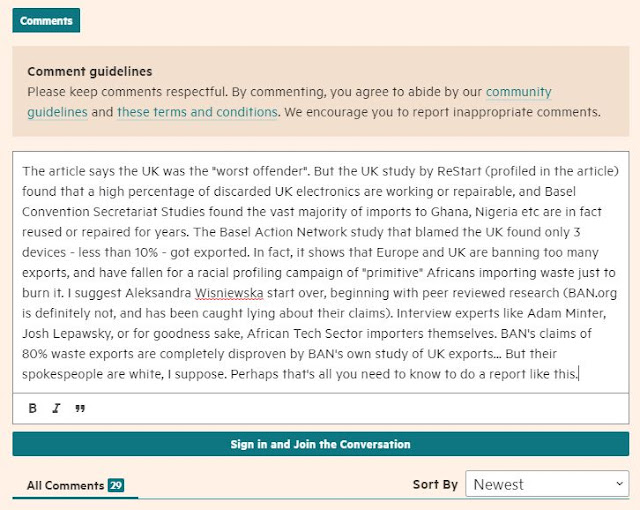