(Digression - Why Would What "e-Waste" Gets Exported Evolve?)

In March 2015, a group of Ghana customs agents, Ghana Tech Sector importers, and three USA journalists accompanied WR3A from the scorched waterside where copper and aluminum wires - wires from cars, appliances, and computers - were being torched in tires.  We'd walked about the fires, dodging the black smoke, as WR3A's Dagbani translator (and Tech Sector Geek, first introduced on this blog (May 2011) translated for a group of young men led by Muhammed Awal.

(Note: I've kind of deliberately avoided really nice photos here, just to kind of capture the ordinariness of it all) 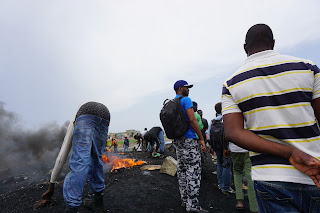 The photographers (myself included) had all snapped some great and alarming shots of young men, dirt, poverty, pollution, and smoke.  The ENGO's halloween language would be hard to resist.  But we now moved the the larger Agbogbloshie yard, where by hammer and screwdriver and axe, metals were being separated from each other and from the plastic skins and wire nerves that bound their bodies.

The first electronic or "e-Waste" device we photographed was a VHS or VCR player.  It was, no doubt, originally imported used.  The Italian photographers got their lenses up close, accepting the premise that this represented and "obsolete"  import. 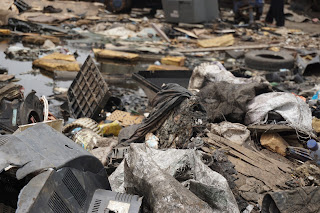 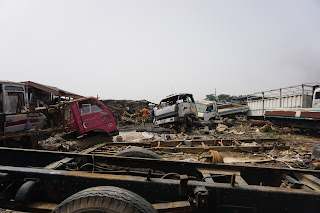 Joe Benson's container exports were itemized, not just by count of appliance, but by brand and model.  In 100 pages of documents I reviewed, there was no VCR.  Wahab, the Ghana Tech who made our tour possible, would never have imported one.

But back in the day, when I lived in West Africa in the 1980s, VCRs were a hot commodity.  An entire industry of "duplicate" movies existed in Nigeria.  Knock off copies of "Rocky" and "Rambo" and "Bob Marley Concerts" were in every marketplace, from Yaounde to Ngaoundal.  Cameroon was still in the business of erecting TV towers, but the "critical mass of users" who made those investments promising had obtained used CRT televisions - every one of which demanded a VHS player as much as it did electricity.

When I looked down and saw the young men pounding, I saw a flashback of scrap appliance from Africa's past decades.  I wondered, did the young Italian documentary makers (in their 20s) have any idea what a VHS player was, and could they imagine a Joe Benson or Wahab buying one from an "e-waste" collector and paying thousands of dollars to ship it here? 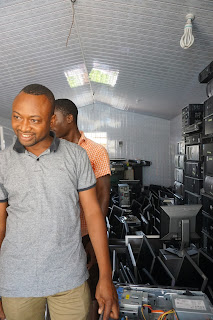 The Ghana customs agents walked away from the VCR having seen evidence that the scrapyard was full of Accra city junk.  The Ghana scrap "boys" walked away, having seen a piece of metal one of them had purchased for a few dimes and put on a push cart... they saw a piece of electronics so old that they were able to buy it for its metal value, so obsolete that even Agbogbloshie's tech shops had taken a pass on it.  The Ghana importers saw something they had seen in USA or EU scrap bins, but been no more interested in importing than a coconut husk.  I saw confirmation that imports were not the origin of the waste we saw transformed into urban mine recycled metals.

But as the photographers circled and clicked their cameras, what did they think they saw confirmation of?

Demand in Africa evolves.  In the 1980s, VCRs were valued almost as much as the television itself, and their import drove a massive Hollywood and MTV counterfeit tape industry across Africa's coast.  But the end of the 1990s, the price of VCRs has fallen.  Blockbuster video stores supplied movies even cheaper than Nigerian knockoffs, as they moved inventory into DVDs.  Streaming would make even DVD rentals a dinosaur.  CRT televisions have had a stubborn demand because the fluctuating "fuzzy current" in African cities tends to blow out modern lightweight Chinese product, but now even the CRT import business has declined. 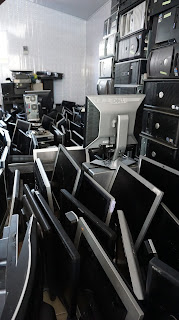 The waste is driven by consumer elective upgrade.

The demand is driven by consumer elective upgrade.

Someday, the device we buy will be upgraded. One day the metals were born - either in a mine or a recycling yard - and formed into a device which will one day meet its fate in either a landfill or a another recycling yard.  That's true whether the consumer is African, Asian, European, American or Islander.  It is a universal human condition, a common stake.  Recycling unites us.

There's no one to "arrest" here, no "E-Waste Kingpin".  The war on mass communications is as hopeless as the war on drugs.  Project Eden is a laughingstock.  The problem is that no one is laughing, and the smudged reputations of Africa's Tech Sector is just another artifact of Racism.  Banning all muslim tourists and immigrants, deporting all Mexicans, stopping all trade with China, move over.  Banning trade with Africa's Tech Sector needs a place at Racism's table.

What's important here is that liberal Blue State ENGOs, not Trump Tea Party David Duke Red State rebels, are responsible for this high tech lynching.  We have met the enemy, and he is us.  Liberals feed off the burning images of victimized minorities, just as conservatives feed off the images of fear.  Using race to trigger animal instincts, fear and nurture, is the ju-ju here.