You know who I'm talking about.  Enforcer of International Laws, in the form of unpassed amendments, the bringer of change in his vision.

The bringer of western ways.   Until the savages learn not to repair and recycle, because it just isn't safe.

The e-waste IT recycling should be done by whitie.

By the way, this internet thing is really cool.  Blackie should take some IMF or World Bank loans and leapfrog into the 21st century, and pay the interest in sweaty coltan mining jobs, to buy more new Stuff.

It's a whole package, it's all planned.  Obsolescence brings jobs to our factories, which we outsource to the people who are too primitive to fix or disassemble our stuff.

What he's destroying are the Geeks of Color, who are the best hope for places that otherwise offer kids employment in the sex trade, or who become thugs like KONY.

The image of the thugs like Kony is what gets the press, which further ingrains the image of an Africa too backward and too poor to fix a cell phone or CRT monitor.   Pounding and pounding the image of primitives into the press in Boston, just as period writers wrote of Custers heroic battles against the savage Apache.

The truth is now out there.   Ghana has 30,000 repair technicians, earning 10 times the average wage, creating places like MIST and intenet cafes like the ones in Cairo.

The threat to Custer yesterday would have been images of women and children laying on the "battlefield" outside their teepees and tents.  The threat today is an image of Chicas Bravas, an image of Geeks fixing, repairing, tinkering, debrouillards patching a new laptop out of two throwaways. 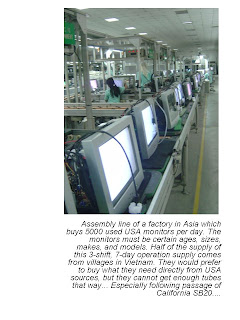 The threat to the ENGOs is that they will be caught having telephoned the EPA in the country of this (Indonesia) refurbishing factory, having told the competent environmental authority that it's a hazardous waste facility.  They are cutting down geeks at a rate that would make Custer proud.

The Custer vision is for OECD nations to invent and design, outsource the horrific rare earth metal mining to conflict mining camps in Congo, funding Koby to keep the primitive savage image of Africa in our minds.   The hard labor and assembly will be outsourced to low wages, and the goods brought back to the rich.   The developing world is kept in a state of constant labor and raw material, with no patents or trademarks or added value, like sharecroppers of the high tech world.

There are probably a lot of historical cliches around both Custer and Carver.  But what we know statistically is that a lot of people were killed by the USA calvary, and a lot of knowledge of plants and species was lost, and statistically it is probable that someone like George Washington Carver, someone with special knowledge of American fauna, was killed in a battle of which Black Elk Spoke.

Statistically, it's likely that of the 30,000 Ghana Geeks, someone will be denied access to an IPhone, and  Africa will remain a little bit more in the dark for a little bit longer.  We will use images of the heart of darkness, the films and clips of Koby, to wrench ourselves with guilt over the coltan mining, and never see the flowers of hope we are shredding.

That's just how I feel, that's how I see it.  If you were me, and this is what you saw, what would you do differently than I'm doing?  VPIRG is mounting an attack on my business, Vermont ANR gave us a 1 year contract to transition all my Vermont accounts to their control, then denied me every permit.  Everyone involved in shutting me down seems to believe they are on the side of good.  They read heroic stories about brave Custer, making the world safe for civilization.

That's how churches go wrong.  That's how good people get screwed up inside and do bad things. 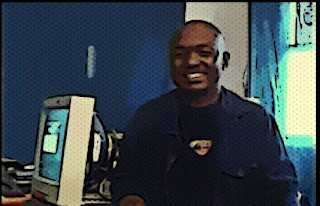 See WTO and China's use of environmental laws to "competent authority away" mining from commerce.  This is way over the heads of people in the recycling community, it involves patent extention, operating licenses, and Wall Street bank loans.   But the main soldiers in this battle don't look very different from the Occupy Wall Street people.  They are engaged in a crusade against primitives, thinking they are in a fight against the banks.   The guns are cameras, and they are pointed in the wrong places.

Precautionar-E Principle Vs. Follower Bling... do-gooders who don't realize the auto-send email letter to Vermont ANR is banning this fellow's repair job, because E-Stewards says that repair is too technical a job for primitive blackie.  He should go back to the coltan mines until he earns enough for the next IPAD, which is twice his annual salary.  We are busy writing theories of the world into environmental policy, which are the drafts General Custer uses to tell his army that he's on the side of the law.


Leonardo da Vinci, if reincarnated for a few moments, would receive a standing ovation from the world.   I may be unpopular, but I know that if I stay with the truth, that I'd be on Leonardo's side of the assembly.  Custer got a lot more applause, a lot more "likes" on his 1800s Facebook Page, a lot more photos in the New York Times and Boston Globes of his day.   Black Elk was a nobody.  But one hundred years from now, it's deliciously and spiritually important to me to be the Black Elk of my stupid little e-waste export world, and not the General Custer.   Black Elk Speaks actually reads like a blog by John Neihardt.   It's the truth of the image of USA calvary on high horses which burns a little longer.   The fireworks and crusade-bling of the anti-export watchdog calvary has something of Custer's ego ingrained, an unwillingness to admit that a gasping old Indian may have held some George Washington Carver story of a cure for cancer in the centuries of medicine man dream knowledge.
Posted by Robin at 8:32 AM