A gigantic crane is swinging overhead, no doubt carrying some new material for the erection of another spire atop the Sagrada Familia Basilica, here in Barcelona.

It's a distraction from this week's challenge. How to explain to a group of Catalan University Professors how markets for used devices work, and how they can be measured without influencing the way they move. The title of our talk is "ZeroKnowledge". It is about the so-called "Observer Effect" in scientific study, and in particular, how data collection in "e-waste", "e-scrap", or "surplus property" can affect the policies and contracts and trade that add up to the actual outcome.

In my first chart, above, we can recognize the so-called "Circular Economy", but also the gravitational shortcuts of efficiency. When a ton does not "show up" to meet the scrap shredder/refiner/urban miner's prediction (and the hours of use of their shredding machine suffers), you cannot state that the material is "lost". It probably went into a more efficient gravitational orbit of "reuse". And countries which are good at reusing and repairing devices also tend not to throw copper away.  We may object to the way they extract the copper when the device is eventually discarded after many more years of use, but the calculation of environmental cost must be honest about the fact that brand new device production to meet the demand in emerging markets is a far worse carbon scenario. The two choices are, let them reuse and repair, or keep them in the dark (nighttime in "project eden"). 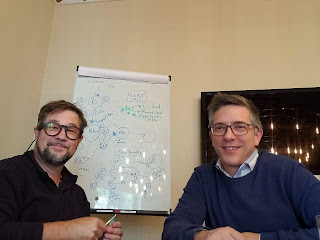 But I digress. Today's talk is not about what the Waste/Mineral Policy should be, but about how the study, monitoring, regulation, certification, blockchain tracking, warranty registration, and GPS tracking devices will spin it, and to what ends.


Above are 3 slides we worked on with the Barcelona EReuse.org group.

They are working with us and a larger OBADA group to get Catalonian computer procurement officials to put into the RFP for purchase of new laptops a "blockchain" which would allow a surplus property officer at end of life to insert a USB key, find the blockchain, wipe the drive, and "inflate" a "spare tire license" such as Chromium or Linux.  The Spanish government would pay $1 per PC for "pre-wiping", which would be save $5 per HD wiping fees, and allow the PCs to be sold directly through surplus property auctions.

(longtime readers will recognize this "spare tire licence" from my first business in 2001).

Gaudi himself would be challenge to diagram the "influence" chain of players in the diagram of Influence and Desired Outcomes.


That term, "Desired Outcome", is the specific trap that environmentalists fall into again and again. Because any multi-stakeholder consensus necessarily involves overlapping motives and agendas and directives, from profit to reducing liability to stature to sex (I've heard tales about stakeholders who "engage" each other after torrid debate). 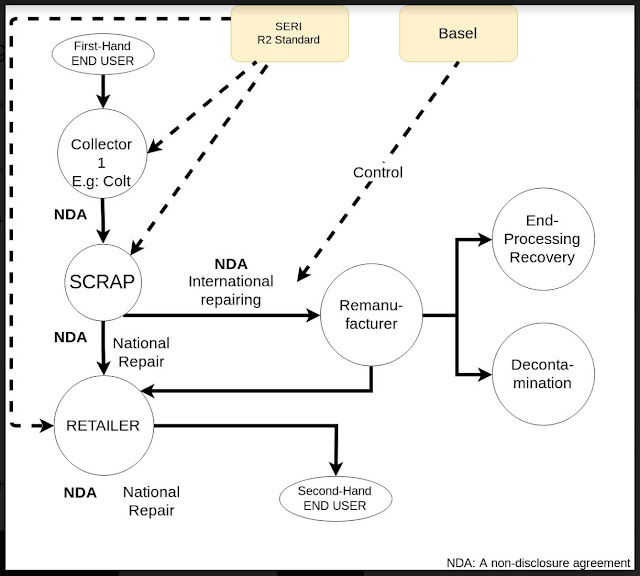 I think I will pick up more on this later, time to catch the metro for my appointment. Suffice to say, this is the type of structural racism that catches Joe "Hurricane" Benson in the undercurrent.

"Zeroknowledge" by the way is the term David uses to address the challenges of Non-Disclosure Agreements (NDAs) signed by R2 and E-Steward companies that have simultaneously signed agreements TO DISCLOSE information in the NDA. 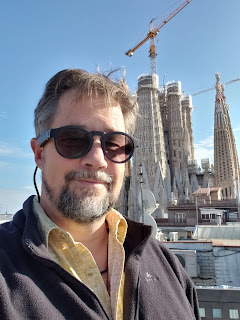 This problem led to the closing of Malaysia's Net Peripheral factory in 2011.  The factory, based on "Fair Trade Recycling Offset" incentives, had developed a glass-to-CRT-glass solution with Samsung's CRT furnace in Klang, Malaysia.  We provided information about it to Kelly Keough and Craig Lorch, who both toured the factory.  Later, Adam Minter visited and wrote an article about it.

The information we provided was used to initiate an inquiry with the Malaysia Department of the Environment, which then chose not to renew Net Peripheral's import permit, leading to the closure of the factory and loss of 100 jobs in Penang.

The Barcelona professors wanted to see if blockchain can provide the downstream proof that auditors seek without violating an NDA.

I'm doubtful that people afraid of "liability" of having said "yes" - like the Malaysia EPA, the R2 auditors, or my company's upstream clients - will (like real estate pollution liability) protect first the reputations of the rich.  People rich enough to shred a laptop, rather than who are poor enough to want to resell and reuse it, will continue to define who is allowed to do what.  Waste Colonialism.  It's a scandal.