Sodom and Gomorrah? Fishing as a Boy? Mike Anane via PBS Frontline

Immediately after our 3 week investigation of Agbogbloshie, Tema, Tamale region and Accra, I went to Vancouver to meet with Graham Pickren and Peter Klein, both professors.  Pickren was very kind to meet me for lunch.

Peter Klein initially returned my messages, but did not seem to want to meet.

Klein's at UBC Vancouver, which is responsible for the PBS Frontline episode in 2010 that labelled Agbogbloshie as "Sodom and Gomorrah."  The label was based on interviews with Mike Anane, who has been repeatedly represented as a "journalist" in Ghana.

My interviews with the scrappers at Ghana led me to believe Anane is not a journalist at all.  I can't find any record of any articles published by him, or any newspaper, radio, or television station he has worked for.  The Agbogbloshie scrappers claimed he was "in cahoots" with AMA, the Ghana developers who wanted to evict them from the increasingly valuable real estate near the center of Accra.  I've written about that before.

Here's another UN sponsored report, by African researchers, on the sources of pollution at the Odaw River lagoon of Agbogbloshie (2002).  It's incredibly well documented, and none of it jives with Frontline.

What I haven't really had the guts to do is to question Mike Anane's credibility.  I interviewed him at an Interpol meeting in 2010.  And I've promoted alternative experts such as Grace Akese of Memorial University or Emmanuel Eric P. Nyalete of Georgia Tech.  But when it comes to being an American questioning an African about his depiction of Africa, I've only attacked Anane's figures, his statistics, his 500 containerloads per month story.  And independent scholars back us up ("Criminal Negligence?")

The claims of the Agbogbloshie scrap workers do appear to hold water.  Take a look at the specific Anane representation below, still on the PBS website.


"I've always known Agbogbloshie as part of the country's westlands. As a kid, I used to play football here.  Some of my friends would go fishing in the lagoon.  When I went back and saw the huge amount of computers shipped in and dumped here, it mad me angry that these children had come to break them up." - Michael Anane

Now this is specifically an eyewitness claim.  Anane is personally claiming to PBS to have seen computers "shipped" to Agbogbloshie.  In the AlJazeera E-Waste Republic series and Cosima Dannoritzer's "The E-Waste Tragedy" Anane makes the same boast... this was a pristine riverside, a fishing village. 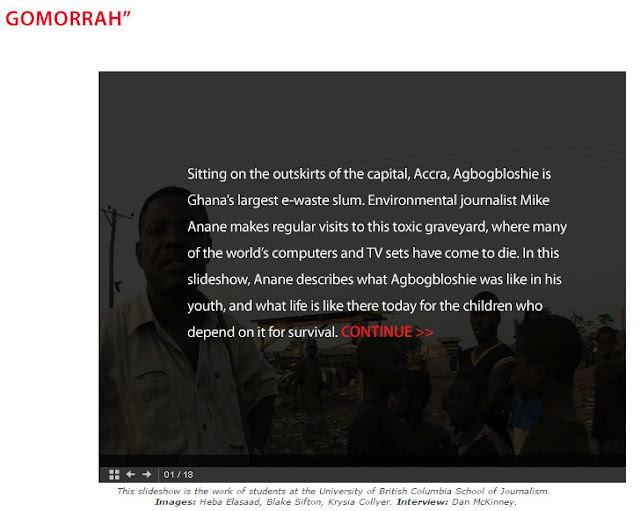 Now how does this square with all the reports of Agbogbloshie, and the Odaw River Lagoon, since 1960?  How does it compare to eyewitness reports from any of my own interviews?  And Anane's claims to have been an editor in 1991-95 for "Triumph Newspaper" (no record of the paper in Ghana, though there's a Triumph newspaper in Kano, Nigeria).  Either Anane was in northern Nigeria, or he was editor from a remote location before the internet. But if that's the timeframe when Agbogbloshie was ruined in Accra, it's at a time when 1) Agbogbloshie was a city dump and auto scrapyard for a city of millions, and 2) there were no strict "ewaste" regulations to avoid as "drivers" per UNEP / "StoryofStuff", and 3) it's definitely not near "the outskirts", it's in the middle of the gosh darn city, visible on Google Maps.  Nothing adds up... except Anane's speaking fees.   Oh, didn't know that? Ask reporters, like those of #ewasterepublic  about the Anane speaking fees, and fees to photograph his collection of plastic with asset tags.

Nyalete, Odoi, and Akese say otherwise, and the reports like the one linked above are pretty darn thorough.  Agbogbloshie was a polluted dump before personal computers were sold in USA, let alone discarded. It's larger and more polluted to the degree Accra is larger and more polluted. There is no international dumping link, and no evidence of Eden after the Akosombo Dam of the Volta River was completed in 1965.  Electricity led to WEEE as roads led to cars.

But Anane specifically says it was "teeming with fish" in 1999.

Anane is certainly not alone among journalists in claiming to have eyewitnessed "E-Waste Hell".   One of my favorite accounts is from GravityCollapse in DemocraticUnderground.com


"I remember walking through Ghana's "Sodom and Gomorrah" slum while living in Legon and being informed afterwards that I was one lucky Obruni to have made it out unscathed. It was both an immediate and remote experience traveling through an actual slum. Immediate in it's presence, I'd never seen anything like that before. Remote in that it was so real, there was such an overload of everything, that it felt like I wasn't even there. I always wondered why there was so much reclaimed computer parts for sale at the Tro-Tro stations in and around Accra. But here is what I never knew until now... "Sodom and Gomorrah is the nickname for a slum in Accra called Agbogbloshie and it is the largest e-waste dump on the planet. "

But it is one thing for a visiting westerner to think pyramids are full of grain, and a lush green riverside turned into the worlds largest e-waste dump over a 15 year period.  GravityCollapse was probably in preschool, learning about Africa's jungles from broadcasts in the OECD, at the time Anane claims the pollution all started, with sea containers arriving full of junk electronics, somehow paid for by labor savings at orphan conglomerates. 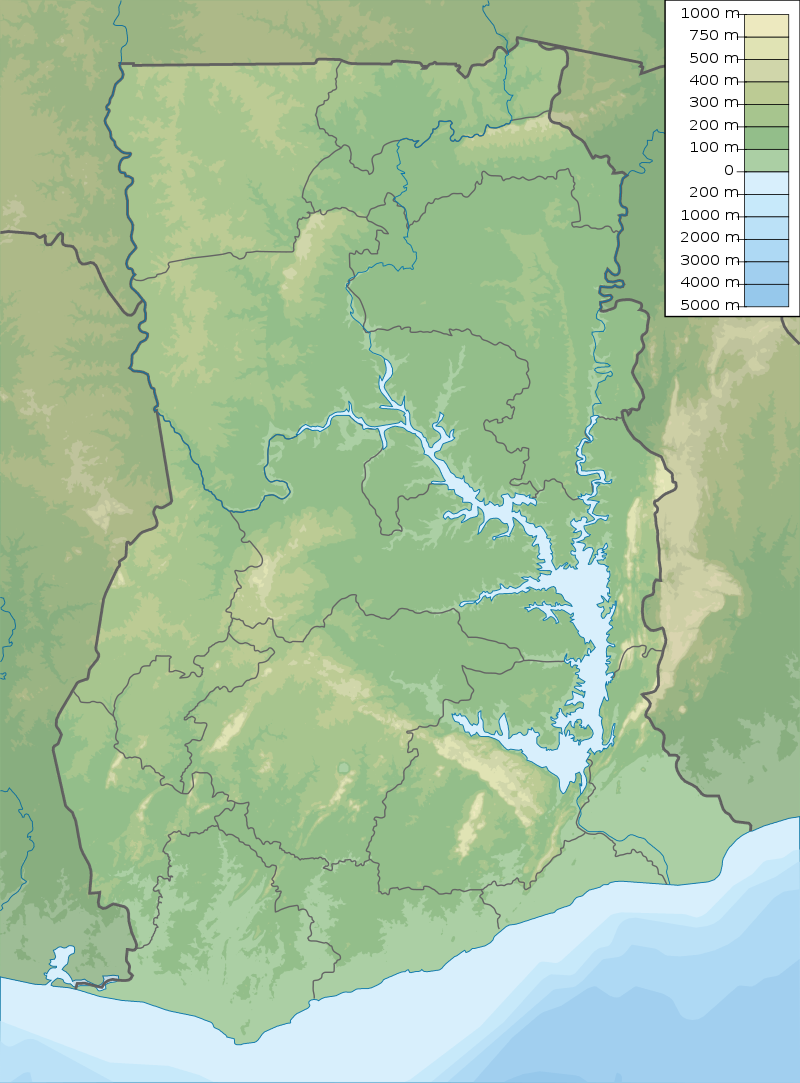 Anane is apparently either fibbing about where he was, or is dishing utter baloney.  Inner city Accra is just that exotic. GravityCollapse may be describing his/her personal feelings accurately, but none of us visiting the Agbogbloshie onion market were in any danger.

I lived in Cameroon for 2.5 years, and it was a long time ago. In comparison, Agbogbloshie is more of a traffic jam than an isolated dump on the outskirts.  I was running a laptop from wifi, dodging taxis, and the only electronics were arriving by pickup truck and wheelbarrow.  But my question is why do organizations like Interpol and UNEP interview Anane and not Grace Akese, whose papers are subject to peer review and who does not charge speaking fees?

The term "Sodom and Gomorrah" was given to the slum in an early 2000s urban planning document detailing how to evict the residents there, destroy their homes, and make it safe for development.   There was no mountain of e-waste then, and there isn't now.

It is time that journalists like Peter Klein and Dannoritzer and McElvaney and Raphael Rowe and Peter Essick come and respond to the Africans who call their claims exaggerated, hyperbolized, and ridiculous.  They are indirectly responsible for putting Mike Anane in a position to brief Interpol Agents and UK Environmental Agency officials and UNEP researchers, who put Joe Benson in jail, despite every single peer researched study contradicting practically everything they claimed.

"All right then, I'll go to hell" - Huckleberry Finn

Forced Eviction and Demolition of Agbogbloshie on World Refugee Day 2015